The face that deserves a boot will be putting his in yours... repeatedly. Then you'll really see him crack a smile. 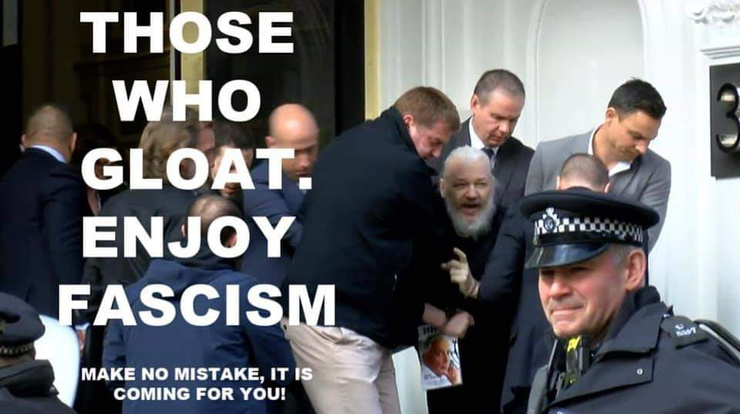 How do we deal with the accusation that he put many lives at risk by his disclosures? Can it be ignored? I think people view what he did as a 'mixed bag' and conclude that he did more good than harm. We could trust these details to be untangled in court if we could trust the courts to do it outside political influence.

I think those are certainly valid questions. My thoughts are that the people that caused literally hundreds of thousands of deaths (possibly over a million even) should not be able to hide behind those acts of Julian Assange that also resulted in deaths because of his recklessness. The greater outrage is the war crimes he helped expose in my opinion.

@WilliamCharles Damn right. I know he won't get a fair trial and I doubt it will even be a public trial. Also, like with Bradley Manning, the corporate media will probably ignore it unless it can be used to make him look bad. If the trial is public and his defense is allowed to present evidence about what he exposed, you can bet the media will avoid mentioning any of that in coverage. I doubt the court will allow any evidence about what Assange uncovered.

"For seven years, from the moment Julian Assange first sought refuge in the Ecuadorean embassy in London, they have been telling us we were wrong, that we were paranoid conspiracy theorists. We were told there was no real threat of Assange’s extradition to the United States, that it was all in our fevered imaginations.

For seven years, we have had to listen to a chorus of journalists, politicians and “experts” telling us that Assange was nothing more than a fugitive from justice, and that the British and Swedish legal systems could be relied on to handle his case in full accordance with the law. Barely a “mainstream” voice was raised in his defence in all that time.

From the moment he sought asylum, Assange was cast as an outlaw. His work as the founder of Wikileaks – a digital platform that for the first time in history gave ordinary people a glimpse into the darkest recesses of the most secure vaults in the deepest of Deep States – was erased from the record.

Assange was reduced from one of the few towering figures of our time – a man who will have a central place in history books, if we as a species live long enough to write those books – to nothing more than a sex pest, and a scruffy bail-skipper.

The political and media class crafted a narrative of half-truths about the sex charges Assange was under investigation for in Sweden. They overlooked the fact that Assange had been allowed to leave Sweden by the original investigator, who dropped the inquiry, only for it to be revived by another investigator with a well-documented political agenda.

They failed to mention that Assange was always willing to be questioned by Swedish prosecutors in London, as had occurred in dozens of other cases involving extradition proceedings to Sweden. It was almost as if Swedish officials did not want to test the evidence they claimed to have in their possession.

The media and political courtiers endlessly emphasised Assange’s bail violation in the UK, ignoring the fact that asylum seekers fleeing legal and political persecution don’t usually honour bail conditions imposed by the very state authorites from which they are seeking asylum."

@WilliamCharles It will now be " How many fingers, Julian..".

How many fingers, Winston.

1984 arrived well before that year. Assange will soon be experiencing Winston's life and America's spooks in the CIA and military intel have had Room 101 waiting for him for quite a while.....

You can include a link to this post in your posts and comments by including the text q:329993
Agnostic does not evaluate or guarantee the accuracy of any content. Read full disclaimer.