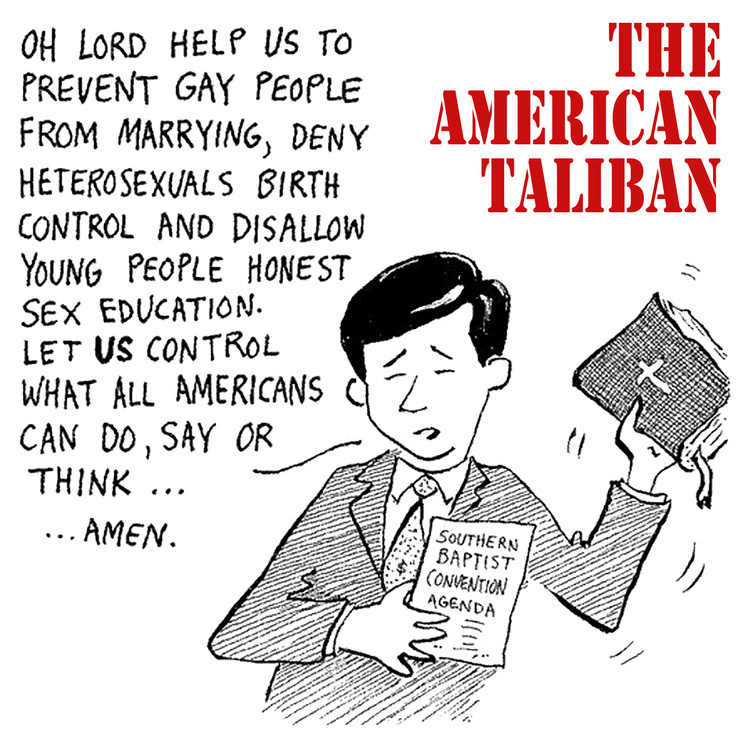 I've been saying since 9/11 that the only difference between Ivangelicals and the Taliban is one not even followed Messiah. Talibaptists.

A degree of hyperbole there I think. Baptists do think homosexuality is a sin, but forgivable, and they oppose gay marriage. So did Obama on his first run for the presidency. Baptists also oppose abortion, but that is a long way from seeking to control what all Americans can do, say, or think. Baptists officially support the separation of church and state. To label them as the Taliban is shrill, dishonest and offensive.

You are slandering my family and friends.

I am slandering religion and enjoying it.

When you see what the Ivangelical leaders say or do (group hugs for tRump) and allow their fellow ministers to say, I think you're overlooking a lot. For people who supposedly support the separation of church and state, they sure spend a lot of time telling politicians what to do.

@Tiramisu And yourself as well.

@Tiramisu, @RonWilliam53 Can you give examples? Remember, this is about Baptists.

@RonWilliam53 The Post is about the Southern Baptist Convention.

The link you provided refers to the Westboro Baptist Church of Topeka Kansas, a known hate group that is denounced by Baptists.

Blatant stereotyping is at play here. 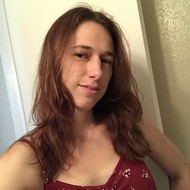 trump and his republican Fascists are the greatest threat to our way of life than any religious group to which they ply themselves as an evangelist movement using religious dogma as their rallying call!

They are Pimped by the wealthy and their corporations! 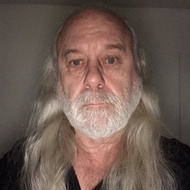 While in some aspects their views are like the Taliban, they aren't planning to enforce their views at the point of a gun barrel.

@Beowulfsfriend According to the Olympic Bomber, he is Catholic. Those who have delved further into the topic classify him as an extremist Christian.

Southern Baptists don't believe in drinking, dancing and card playing. Although where I live is primarily Southern Baptists, they got the best craft breweries I've ever been in and support dancing in the street during their free summer concert series, Jazz on Ram Cat Alley.

Haven't seen anyone playing cards. No problem in buying a pack of cards.

Yes, the Evangelical leaders very much are calling for the extermination of gays, trans, abortionists, atheists. They have actually written a manifesto calling for the conscription of all able bodied men to carry out this genocide of anyone who does not submit to their God

I disagree. I worked with a 'born again" He could not wait to get his hands on a Uzi and wipe the rest of out at the "end times.

Bet you won't spend much time in front of an abortion clinic without wearing a bullet-proof vest.

@RonWilliam53 you won't spend much time in front of an abortion clinic without wearing a bullet-proof vest.

Thanks to shooter video games, people have been trained to shoot for the head.

@starwatcher-al He could not wait to get his hands on a Uzi and wipe the rest of out at the "end times.

That "thou shall not kill" thingie mabob didn't work all that well?

@BeingNobody They have actually written a manifesto . . . .

Religion has always been about having power over others.

The new group telling you how to think and what to do is the left.

So, you deny the above?

I think there is a bit of both but the left aren't instituting political policies while the right is clearly making it easier for the religious to persecute others.

@LimitedLight To a degree, since the left is worse. For years left students have been dictating which speakers can speak on college campuses, which staff should be fired for not meeting their protocol, which college groups should be permitted to openly advertise, etc. That's a bigger issue.

@repubatheists Really? And how much time have you been spending on campuses, verifying this?

@LimitedLight There's been plenty of coverage of it. I primarily take note of atheist conservative author Heather Mac Donald being challenged on college campuses by students. There are many other speakers who have been challenged.

Absolutely! Don't tell women what to do with their body! Don't be Nazis! Don't put children in cages! We lefties are so pushy!

@repubatheists If you saw it on FOX or any rightwing media, you did't see it. You were fed their bullshit.[futurefemaleleader.com]

@repubatheists What leftist dogma? That women should have rights, too? That brown people are actually human beings ?That wars for resources are bad things? That the environment matters? And "challenged"? You mean their racist crap getting called out? Such poor snowflakes you cons are. I bet the poor Nazis in Charlotteville have your thoughts and prayers. They just wanted to beat up minorities and run over women and they got "challenged".

At least I feel relax HERE knowing that no one will try to chop my head off because I refuse to comply with religion guidelines and/or associated BS. So no, you're not comparing apples to apples.

I hang out with Muslims. None of them ever cut my head off. Last few synagogue massacres and the black church massacre was done by XIANS. And yes, radical Islam is dangerous but look up all the wonderful Christians who cheered the Islamic attack on that Florida gay club.

@RonWilliam53 I don't go to church and I am not gay ( Not that there's anything wrong with it). I guess IamSafe

@RonWilliam53 Remaind me again please who shot Steve Scalise?.... Dude, we can do this all day. The only point I want to adress is that we may not be the perfect society (far from it) but to compare against the taliban.... C'mon, seriously???

This would be a lot funnier if it weren't true. People don't even see it coming. This will no doubt end in a war between the religious right and the non-religious, logical, critical thinkers. All those Christians that believe this 2000 year old story, will not even step outside their comfort zone and realize that this SAME STORY has been told EVERY 2000 years for the past 10,000 years. It's always a guy out of place in his land, crucified, rises from the dead, etc. Over and over and over. . It's pathetic. 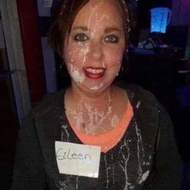 Oh...but those stories are not the "true" god......true christians don't listen to those pagan stories. Na na nananana....hummmmmmm.

@HankSherman
Especially since all their sainted holidays were pagan celebrations!

@of-the-mountain nananananana.....hummmmmmmm lol yeah, but their selective hearing is monumental as in the three monkeys

Such are the evils of religion

There is some truth to that... religions have for a long time attempted to shape the minds of their followers, mainly by indoctrinating them while young.

And in other cults, considered child abuse......the christians really don't like someone stealing their methods.

Was the Olympic Park Bomber a southern Baptist? 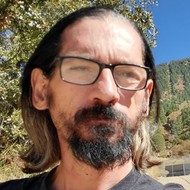 Eric Rudolph spent time with his mother at a Christian Identity compound in Missouri known as the Church of Israel.

According to Wikipedia he wasn't one of them. It is stranger than that.

"In a statement released after he entered a guilty plea, Rudolph denied being a supporter of the Christian Identity movement, claiming that his involvement amounted to a brief association with the daughter of a Christian Identity adherent, later identified as Pastor Daniel Gayman. [Gayman's church is the Church of Israel, a denomination that emerged from the Church of Christ -- #99] When asked about his religion he said, "I was born a Catholic, and with forgiveness I hope to die one."[28][29] In other written statements, Rudolph has cited biblical passages and offered religious motives for his militant opposition to abortion.[7]

Some books and media outlets have portrayed Rudolph as a "Christian Identity extremist"; Harper's Magazine referred to him as a "Christian terrorist."[30] The NPR radio program On Point referred to him as a "Christian Identity extremist."[31] The Voice of America reported that Rudolph could be seen as part of an "attempt to try to use a Christian faith to try to forge a kind of racial and social purity."[32] Writing in 2004, authors Michael Shermer and Dennis McFarland saw Rudolph's story as an example of "religious extremism in America," warning that the phenomenon he represented was "particularly potent when gathered together under the umbrella of militia groups,"[33] whom they believe to have protected Rudolph while he was a fugitive. Rudolph rejects all suggestions that he is a racist or has racial motivations."

You can include a link to this post in your posts and comments by including the text q:342750
Agnostic does not evaluate or guarantee the accuracy of any content. Read full disclaimer.