To think that our human species of all the species on earth and of all the "earths" in the universe has some unique superior value due to the Darwinian evolution of our brain - based solely on adaptation to our unique environment for the perpetuation of our species... is the epitome of arrogance. We are complex biological creatures designed by methodical survival by adaptation to: eat - grow - mate - pass on the genetics that favor survival - and die - like all other creatures before us - nothing more. All of the mystics that ever existed or ever will exist - cannot alter that reality - no matter how much we want to believe they can... over population by humans - like a giant deadly virus - has caused catastrophic climate change yet we are not the only creature capable of destroying life on this planet as we now see microbial infections and mega-pandemics capable of making our planet uninhabitable for most current biological life... and with all of our intellect - we continue to fight among ourselves for control and domination of our pathetic species - perpetuated by our insistence on some mystical belief system - why do we continue to insist we are superior?

Really, what we need is a predator. I propose we genetically engineer a vampire race. 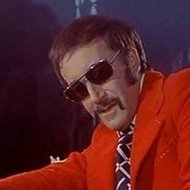 It's quite simple. As a species we have been too successful. When lemmings are too successful and overpopulate their environment they have the decency to run over a cliff. Maybe climate change is our cliff.

So negative! Who gave you a grouchy pill?

@FrostyJim I'm kidding! You make good points; if you dwell only on the bad things, it can look terribly bleak. I find when things are for me personally, I tend to see the bad side to everything, so-so and i see the good and bad, and when things are going exceptionally well, I see the positive things more. Things are going well for me, so I'm seeing good things. I'm not saying the same holds true for you.
But objectovely, it IS true there are as many good things happening as bad. It seems it's a tossup which way the scales will tip in the end. I certainly don't know the answer, and I dare say neither do you.
Looking at the big picture: does it really matter? Our lives are short then we're gone. Unless you think reincarnation is a possibility, that's it! Why not let others worry about all the sham, drudgery, broken dreams, hatred, greed, etc., surrounding us. Live YOUR life as if everything's great. Block out all the noise.
And if you can do something worthwhile along the way, great.

viruses by definition can't be giant.

catastrophic climate change? were humans the cause of the mini ice age in the 1600s?
how about the worst global drought in history in 1947? or the worst drought ever in australia in 1829?

methinks you're caught up in the global warming CO2 hysteria.

I believe you are wrong and you are missing the point in a giant way...

Typical comments of climate change deniers I'm afraid.The mini ice age was a localised event in parts of the northern hemisphere. The mean temp of the earth did not change.

The same with the droughts. Purely localised events.

@Moravian ,
these temps that they are going by go back to 1850. they're now saying that global temps have risen by a few tenths of a degree. now there's a lot of asphalt where temps are taken. and the thermometers that were read by humans in weather stations are just not that accurate to 1/10 degree.
i know b/c i was a meteorological tech in the RCAF.
but i know it must feel great belonging to the global warming tribe. enjoy.

Of course, on the other hand, the human brain is the most complex structure we know of.

You got that right - although I prefer to call it arrogance...

Carl Sagan is one of my hero's.

Specie is not the singular form of species. Species is both singular and plural.

Oh? I learn something every day...

@FrostyJim Any day you learn something is a good day.

Mystics do not always vaunt the human species. A typical view by mystics is that we are not our bodies-that all of life is one thing, and that ultimate reality is comprised of universal consciousness.

Those undesirable outcomes that you deplore are seen simply as part of nature, neither good nor bad.

That is simply another false interpretation by the human brain and has no basis in empirical truth - it is just a belief by some humans that insist they are superior...

@FrostyJim I don’t think there’s such a thing as empirical truth. Truth is not absolute but relative. Truth and falsity are value judgments—emotions.

I agree with your first sentence about evolution, but to infer from that that all of reality is nothing but a meaningless mechanistic process takes a religious-like leap of faith. Reality is a deeply profound, overwhelming phenomenon of staggering significance and value. Our conscious awareness of reality means that we are far beyond just being “superior” to other species. Our bodies are neither superior nor inferior to theirs. The continuum of life is consciously aware. “We” are them and “They” are us and existence is the mother of all miracles.

@WilliamFleming - I believe you are wrong and I am right... you have no way of knowing - just believing and that is not truth - truth does not care what you believe...

@FrostyJim Offhand I don’t see how you have any way of knowing. You go beyond the realm of science when you make value judgments regarding humanity.
Also when you state that competition among humans is “perpetuated by some mystical belief system”. Do you have evidence for this empirical truth of yours? Even our primate cousins fight among each other for territory and breeding rights.

Maybe truth is different in Wasilla.

@WilliamFleming - what is real empirical truth and what is belief is hard to discern - since we are subject to cognitive bias and that is innate in our intellect - to pretend that you know is much easier.

"For small creatures such as we the vastness is bearable only through love."

After observing the animal kingdom for 60+ years I think we are the first but not the last or only to evolve higher intelligence. We may not be here when the other catch up but many species will evolve to higher forms. If you think about it, it's really inevitable. It's either evolve up or extinct out.

I would love to live in a world of sentient dogs. And dolphins. oh. wait a minute.

@Metahuman Well, I hate to bust your bubble on dolphins but they aren't all that much better than humans towards females. Dolphin males often gang rape young females to death. They herd them out of the pod and then force them to the bottom to mate them and the males take turns going up for air while the young female winds up drowning. After I found this out I just can't look at them the same.

I agree with you, it is sad☹

You can include a link to this post in your posts and comments by including the text q:357834
Agnostic does not evaluate or guarantee the accuracy of any content. Read full disclaimer.