Finally off work sitting here with a cup of tea and a burrito. Yum! Whatcha all doing this weekend?
This evening I am going on a medieval torchlit guided tour of my home town. 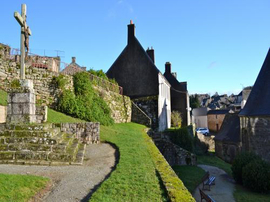 It was fantastic.
We met at the Bains de Reine, were given tiki torches, about two dozen if us were there. Then were shown around by a young medieval pilgrim. At each stop, to our initial surprise, a character from the towns history - the local ostler, the Miller and his wife, the nursing sister of the old leper hospital - stepped out of the shadows, had a little piece to say and then interacted with the crowd. Best one was a drunken English knight (with a surprisingly good fake French accent for a French man !!) chased the children around the old wash house.
Wonderful balmy weather, loads of ambiance. I'll see if anyone has uploaded any photographs for us.

No serious work until Tuesday. I was gonna tale a road trip. #1 son has been sick, so we'll hang out, take it as it comes

I myself am going to meet a lady who reached out to me through Match.com recently, we've been chatting steadily and have a lot in common. It seems like we have a great chance to start a very fun friends relationship and maybe build up something serious eventually. No expectations though, just going to enjoy the moment.

Medieval torch lit, got the type 40 fired up? BTW have a good time.

BTW have a good time.

You can include a link to this post in your posts and comments by including the text q:404582
Agnostic does not evaluate or guarantee the accuracy of any content. Read full disclaimer.