How can some one explain how great humans have being transformed to sheep? I don’t understand 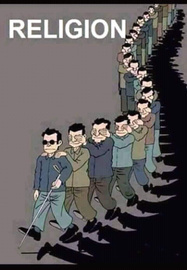 I thought I was special at some point for rising above my indoctrination. But after coming to a place with two or three churches per space of corner, I can attest to the fact that, here, it's akin to domestic terrorism. The hospitals are church affiliated, the schools are, you go into a corporate franchise with faith-neutral laws and you'll find local center decrees about how they are a christian organization. Small companies (usually those with high turnover, dwarnism cultures, musical chair stability levels, and scruple free staff) identify as christian as one of a few tricks to gain a quick following. It's really the fear of sticking out when you're involved in classes above a certain income level, company size, etc. With 200 people on staff your "cultural fit" becomes less important, the same is true for things you can do online and other jobs; but ppl do not know this at all/until afterward and become frantic about submitting entire families, kids included, their baptisms included, to church culture upon a new move, a job loss, and so on.

There can be a recruitment process that is specifically geared towards tying in the lack of economic viability of non participators as evidence of their wrong path. And there is one for using the needs of single mothers, etc. to bring in families.

People use it as what it appears to be in church verbage: a place of support via conversion, like after a missionary came to feed those who take their pledges and promise blind allegiance- you're also required to commit your soul and life to a second person entity you've just heard of, giving over your choice to learn, grow,* and change as you do.

That promise of "life fixes" is a futile one anyway. They can't fix your problems. They especially can't if their level of ignorance is far lower than the info and sources you need for repair, which is the case when lead by these theories for many-everything is simple, common; and so you must be just like everything they know and nothing they don't to save your time from being wasted in fruitless education that will fall on deaf ears and tired ones.

God will fix all, and your failure in improvement is evidence of your disbelief or lack of alignment at the end of all that, or simply God's will; they can offer you their version of emotional encouragement, which for some, if not all, is damaging anyway... You are never enough, born in sin, and saved through blood shedding. Now come all and let's sing about it

(Try being an HSP, have physiological based ailments, or simply being on a progressive life path to begin with, and see how that messaging can f**k you over. As an empath, you're also exceptionally screwed during a wailing feuled southern revival, so let's hope u truly have that masochistic calling to attend).

Wouldn't anyone be better being free to use information gained by real evaluation of their day to day experiences to solve problems? But with terror based conversion, like happens all over the southern US, and likely other parts, you'll find church both giving you a problem and then suggesting that they are the path to fix it. Some pray on the elderly and mentally ill, as well as use them to watch and restrict the freedom of potential recruits. The most derranged in a community will flourish in the power they have to judge and offend.

It may seem like I'm exaggerating it, but this is real; and it's awful. Is religion alone responsible? It's the people. And, yes, the inspiration is there for bad, as well as good. Yet, they do the same or similar in a socialist, religion free, society and have used such internal measures of control to restrict free thinking there. I don't think I want to be in a nation where you have to be or have to not be, except when it regards what hurts others. Religion is especially harmful for some that are a part of it and mean't for something else. And for some others, they use it as they would use any seat of power, to grow by cutting others down. But yes, it usually starts by a decree of blind endless and abundant following. Remember the "man of God" who took his son as a sacrifice in order to please God? Many followers are also not biblically read, which may be a good thing, as they would move to new levels of faulty acceptance in order to meet needs that should not take that level of adjustment, and often don't in post missionary exploitation stages. A blind follow start and pledge of allegiance for life, can continue blindly, despite the foolishness it produces.

The Lord is not my shepherd
for I am not a sheep!

Hello and welcome. Enjoy the site, it will certainly answer your question, and if you have time do check out the groups, there is something for everyones interests.

Happy a go at critical thinking and then have a stab at it!

You can include a link to this post in your posts and comments by including the text q:429300
Agnostic does not evaluate or guarantee the accuracy of any content. Read full disclaimer.