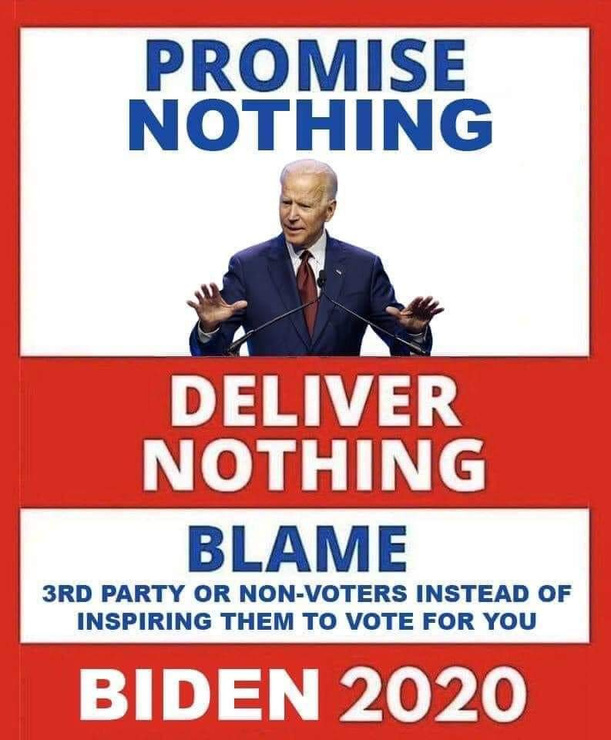 I haven't seen a single Biden bumper sticker or yard sign. And I'm in LA County. Even though my congressional voting district is quite red, I saw more than a few Bernie bumper stickers. Seriously.

"There’s a terrible danger in voting for the lesser of two evils because the parties can set it up that way."

I already know I hate Republicans. Joe wants to court them. Sick of Establishment Dems pretending to be on my side.

They don't even seem subtle about it anymore. They remind me of the alt right.

Like I say, both the corporate Dems and the Repubs will ratfuck you if you are one of the peasants. The difference is the Repubs will tell you straight up they're going to do it, while the Dems will smile in your face and say they are on your side, and maybe use some lubricant while they ratfuck you in the ass. The Repubs won't bother using any...

"What could possibly go wrong?"

If your support is bought, it's not a win... it's a purchase.

This is how I see it. Sorry if you all have buyer's remorse.

Folks, put a period on this discussion.

Whistling past the graveyard is never a rational response.

@WilliamCharles You are more than a day late and a dollar short.

Not to worry. The DNC declared Creepy Addled Uncle Joe the "safe" choice.

You've seen his recent brain farts, no? This is not due to his stutter, he has difficulty keeping his thoughts straight.

@WilliamCharles I'm so tired of Biden's supporters saying that his dementia behavior is actually caused by his stutter. He's had the stutter his whole damned life and it was not causing him the kinds of problems he's been exhibiting lately. Even five years ago, if you go back and look at video of him, you can see he was not having the kind of speech and confusion problems that he has been showing in the last year or two. That is why this is dementia that has developed recently and is only getting worse.

I fvcking hate being lied to. They did it with St. Ronnie's Alzheimer's. Biden would totally unravel in that 4 hour debate Trump proposed. In various interviews, you can see him doing involuntarily chewing motions. I think that's an indicator of the meds they give him to coax a bit of coherence out of him when they roll him out in public.

@WilliamCharles Probably. I know that a side effect of some dementia meds is like tarditive kinesia, including chewing motions.

@WilliamCharles I don't know about other progressives, but I have no illusions that Biden can be pushed to the left on anything...

I thought the meme should have just said "Apologist Dems" or something. It's some real Lucy and the football shit.

Why do you take what trump does and assign it to Biden...

Even Trump didn't think playing Despacito was the way to win over Latinx votes.

The further this goes, the more I think they are wanting to lose, partly because the party leaders and their donors are fine with Trump's policies on trade, taxes, healthcare, war, etc. and also because they would rather have Trump stuck with the blame and burden of having to govern with Covid and the economy. As for the BLM movement and racial injustice, the DNC doesn't care about solving that, they are more interested in having that issue to raise money and fire up their base and bash the Repubs with. Corporate America also loves having the BLM movement and racial injustice around so they can virtue signal and pander to customers without having to actually give up any power or give up any of their profits.

This kind of stupidity is why the wealthy always win. 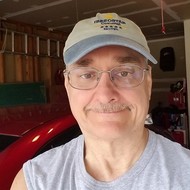 The wealthy will get a corporatist tool with either candidate, so it's win-win for them regardless.

Ask yourself why the DNC would kneecap a truly popular candidate that draws from across the political spectrum to install one that was dead in the water.

@WilliamCharles Biden won the primaries.... you can say he was "installed " all day long, but that does not make it true. You can say the system has some problems and I agree. I simply say what system doesn't and how do we fix them.

@WilliamCharles nice touch, but you obviously misunderstood my comment; or, just prefer to ignore it. Either way, you didn't address the facts.

I think it's you ignoring the facts, but whatever. Biden's the "safe" choice. We can all sit back and watch him coast to victory. Maybe he'll crush Dolt 45 in the popular vote like Madam Pantsuit did.

Joe's post election excuse book will probably be titled "What Happened?" because if his handlers don't tell him, he won't know.

NO -- it’s YOU wanting US to lose to trump

Are you saying the blame game is justified?

Now is not the time for a "hold-your-nose" candidate. There's actually a "Settle for Joe" PAC.

If your main argument for Joe is "Stop pointing out what a shitty candidate he is!"... you may have nominated the wrong person.

@WilliamCharles It would take a trackhoe to dig through your apparent level of cynicism. Fortunately, the nation’s beyond your tactics; they made their choice. If you can’t evolve, as Joe Biden has, that’s your problem. But your message is sick, and there may be no cure. Yet again, grow up ~

"Fvck around and find out" wasn't a threat, it was a promise.

@Varn There are two problems with this, even if any of it is true. One, it's a lot of criticism with no solution or suggestion as to whom else to vote for. Two, it neglects one of the most important reasons to vote for Biden (and why I voted for HIllary Clinton in the 2016 general): the Supreme Court.

@bingst Absolutely. Had a ..near former friend exhibiting the same stuff on fb, albeit, back when it may have changed something. As he was all over Bernie, while bashing ‘the Democrats,’ describing them as being ‘just like the republicans’ … I researched & listed a comparison of the Supreme Court Justices appointed by each party. The difference was/ is astounding! The parties are not ‘alike’ when the rubber hits the road.

This guy’s obviously off the rails… My suspension is, a lifetime of disappointment; and a platform allowing for such abuse.. There also seems an element of ‘take down the system’… Angry, even vindictive, likely having no one (like children or grandchildren) he cares about, or who cares about him … he’s ready to blow it all up!

Most aren’t. Their retirement plans are tied to the (damn) stock market, they’ve noticed substantial progress within their lifetimes, as well as the unavoidable setbacks, have those they care about dependent on aspects of the system, and are willing to be patient, and capable of working from within.. I understand the loss of patience, but have also felt the thrill of hard-earned progress. This guy’s a bomb-tosser, nothing else but sad..

Actually, I ‘use’ characters like him to motivate me. Active for Biden & Harris, every time I feel I’ve encouraged someone to vote for them ..who may have been swayed elsewhere, this guy’s ..power is diminished. So as he continues to tilt at windmills, some of us are actually accomplishing something

@bingst I wondered, but relied on the (F'n) spell/ grammar-checker to alert me to those, which it didn't.. hope you found more in there than just that, though

I have to agree with you but we have to choose the less worse between Trump and Biden. I am going to hold the nose and vote in November.

There was nobody better in the Democratic candidate lineup in 2020. All were non-doers, over talkers and unfit. Hillary, Biden, Bernie all have nothing to show for their decades in Congress. They are not inspiring leaders either, everybody was using campaign money, hiring consultants and throwing policy plans at us but nobody made us rise on our feet.

"nobody made us rise on our feet."

They've been acting their way out of trouble and into power all their lives. They are trying to disguise their mechanisms with the acting chops of a kid with his hand in the cookie jar. They're all style and no substance.

You can include a link to this post in your posts and comments by including the text q:534618
Agnostic does not evaluate or guarantee the accuracy of any content. Read full disclaimer.