Is this still a dating site?

This is still a relatively new site. The kettle of fish increases everyday.

And, ya gotta work many sites. OKcupid is legitimate and the new rules for messaging are good, though a bit strange.

And, I think more profile questions here will be good. OKC has thousands. Helps lots with compatibility, and therefore suggested matches.

If you want it to be.

Yes, how much do you make a year?

Of course it is ? Want too marry me ?

I only date straight women.

@Jacar what does this mean?

It is for some.

Unfortunately not many options in my area. 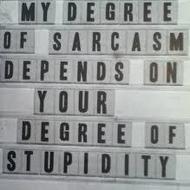 Hit me up big boy

Hmm good question but so far... I've been dating from this pool and... so far so good, I Must say. I've met some rather interesting people here. I just never speak about my A.com dating routine publicly any longer. I'm private like that, but yeah... im currently dating someone FROM This site actually.

So yes... i'd say so. Depends on what you want. I mean, I've been single now almost 3 years and i get hit on on the DAILY, real time and otherwise, BUT... i say no always because I can never find anyone that stimulates my mind and as a sapiosexual, the Regular Dating world can become a nightmare. It is all so based upon Aesthetics and I am No Fan of aesthetics. Hence, here at this site, its almost as though there exists and IQ Pre-Req so i usually have LOTS of choices that I would, otherwise, not have.

I am pretty disgusted by the bar dating world my friends are all privy to. I need something MORE. I need am ONLY Turned On and Attracted TO Intellect. I could CARELESS what they look like, so long as they can Turn my Brain on... I Am Down!

So yes, I would say it IS A dating site, but like I said, I use it, I just don't discuss who I am dating from around here and I date wise enough men around here that they are ALSO equally private and say nothing. I am sure I cannot be the Only One, right? Must be OTHERS dating around here too that are Also closed lipped lie myself.

Good for you, and thank goodness, you are not a man and black. I have never even received any interest, instead I was attacked when I rises concerns about my failure to find someone in this anti-people society.

It is only a dating site for the people who are here for dating, and as you see by the Profile info a great many people are here just for friendship and conversation in the Community. The people who seek dates must still make the usual efforts to find dates making contact and having intro conversations with people. The great thing is seeing how people present themselves and how they reply to popular questions so you get to see if there is any chemistry between you. I don't think it's a "sit back and they will come running to your door for a one night stand " kind of dating site. But I have only been here a couple months so maybe others have better info for you.

You have not walked in.my shoes.

@0752532706 It is true that I have not walked in your shoes, just as you have not walked in mine. Nobody else who replied to you has walked in your shoes either, correct? lol What does that have to do with anything?
I just gave you my honest opinion and there was no judging of you in it anywhere since I do even know you. I was hoping it might help you, but maybe it did not. You may have different customs and needs than the average person here, which may influence your chances for success. By the way, I do know somebody from Kampala, who is a tenant renting a room in in my home here in Canada. So I do know something of life in Uganda and the homophobia, and bad treatment of the LGBT community people there. That will not be changing much however because of the backward local customs and traditions, general poor education, and the bad influence of religion and the corrupt government of course.

Yes and we now have a Singles Group with 100 members in 2 days.

Are blacks allowed in the group?

You can include a link to this post in your posts and comments by including the text q:71957
Agnostic does not evaluate or guarantee the accuracy of any content. Read full disclaimer.