Travelers who are deemed "offensive" could be the targets of even more harassment from the TSA if they are placed on the agency's new secret watchlist.

More overt useless safety concerns that does not deter any real terrorism or crimes!

The Transportation Security Administration (TSA) is forming a new watchlist specifically for people who give its agents a hard time during security screenings, and are deemed “unruly” passengers who act in ways that TSA agents find “offensive.”

The New York Times obtained a five-page directive recently published by the agency announcing the establishment of the watchlist or “95 list,” which is a new program that began in February.

The directive, which was reportedly issued by Darby LaJoye, TSA’s assistant administrator for security operations, states that “An intent to injure or cause physical pain is not required, nor is an actual physical injury.”

The criteria that could land a person on the list is extremely vague and could include anything from loitering near the checkpoint to having a verbal altercation with a TSA agent. The directive also suggested that anyone who presents “challenges to the safe and effective completion of screening” could be added to the list.

On Thursday, Congress asked the agency to reveal more details about the watchlist and to notify the people who have been added to it. Until the report from the Times, the agency did not reveal any details to the public, even those who are on the list.

During a House of Representatives Homeland Security hearing, Rep. Bonnie Watson Coleman of New Jersey said, “TSA has an important job to do, and I want TSA officers to be safe and secure. What I don’t want—what I think no American would want —is an excuse for unfair, secret profiling that doesn’t even offer a chance for people to contest their name appearing on such a list.”

TSA Deputy Chief Counsel Kelly Wheaton said in a recent statement that there only 50 people on the list, but two other government security officials told the Times under the condition of anonymity that there are likely many more people on this list. 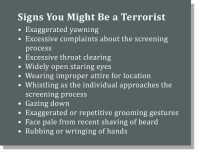 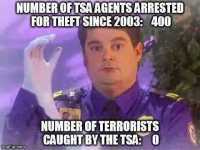 Welcome to the police state.

Great. Another wonderful aspect of having handed all branches of (our US) government to the paranoid Republicans is there’s no restraint on government abuse or overreach. It’s ironic how the party that constantly harps against an intrusive government is the greatest abuser when given control of that government.. Safeguards for ‘the people’ are currently gone..

...and some of those creepy minimum-wage TSA punks I’ve watched are a tragedy waiting to happen. I look forward to robots! Until then, I’d rather drive than fly ~

You can include a link to this post in your posts and comments by including the text q:84667
Agnostic does not evaluate or guarantee the accuracy of any content. Read full disclaimer.