You are all probably aware of the tendency, of some theists, and especially woo and spiritual pedallers, to resort, when cornered, to relativism. “Your agnostic/atheism is just a belief based on faith like mine.” Or conversely to accusing you of it, with the claim that all none theists must be relativists and have no solid foundations for things like ethics. It is therefore perhaps a good thing to think about the basic fallacy of relativism, and how to counter it. I had to do this a few years ago when a young friend, was in danger of going through a relativist phase as many teenagers do. (She didn't, actually, she is a lot smarter than that.) But when asked by her to justify my view, this letter resulted.

Dear Sylvia, thank you for showing an interest, in an old man's views. Let me tell you an old story. It has in fact been retold so many times that there are probably many a thousand different versions of it. Which is good because that means I am happy to tell you it again in entirely my own way. I do wonder why it has stayed so popular for such a long time? Could it be because many other people think, as I do, that it is one of the wisest and simplest stories ever told? It is sometimes called the Elephant Joke, though it is not really a joke at all in the true sense just a strange little story.

Lost somewhere, who knows where, on the very edge of discernible time by a nameless forest, there was once a quiet forgotten village, bypassed by the whole world, (a bit like our's really). And since the village was a long way from the lands where elephants usually roam, and the villagers rarely travelled far, many of them had come to believe that perhaps elephants did not really exist after all.

One day there was a party in the village on the other side of the forest, and because much was promised in the way of food and drink, nearly everyone went. However the forest path that connected the villages was a narrow twisting one, and since the night looked as though it would be dark and stormy most people came home fairly early. Except that is for the village drunks, who lingered long into the night drinking their neighbours wine, until every drop of it was all either gone or hidden away by its owners. Finally very late at night the last few set off for home; forgetting as they did so to take a light of any sort. ( They were very drunk.)

What nobody knew, was that a caravan belonging to one of the local Rajahs had recently passed by the forest, and a frightened elephant had escaped its keepers. Feeling lost and afraid the elephant fled into the forest along exactly the same path which the drunkards were using.

Because it was very dark, under the trees, the drunkards made their way forward very carefully through the forest in single file, each holding on to the one in front. Until at last of course they met the elephant who was standing right in the centre of the path. The elephant being frightened and alone sniffed the humans in the dark and came forward to investigate; so that the foremost drunkard ran directly into its trunk. He let out a yell, stepped back, and told the others that he had was sure he had just touched a huge snake that was waiting for them on the path.

The others told him not to be so timid and to stop exaggerating, snakes simply were never that big. So they pushed the second one forward to find out what was there. The elephant however was alarmed by the yell and turned round, so that the second drunkard bumped into its tail, and said. “No its not a snake, its a length of old rope. Maybe someone has set a noose trap.” The third, being brave when drunk, then pushed forward, just as the elephant turned back, and ran into a tusk. “No its not a noose.” Said the third. “But it is a trap, one with a sharpened stake.” The fourth who was growing impatient, pushed round the side and was hit by a flap of the elephants ear. “No that is silly, its just a big sheet of canvas strung out across the path.” Then the most timid of the group finally plucked up courage, pushed carefully forward, and keeping very low felt his way round the whole animal beneath its belly, declaring. “No its nothing of the sort, its just a small shed on four thick columns with a badly sagging roof.”

Finally the least drunk of them all declared that whatever it was in the path, it was obviously large dangerous maybe a trap and perhaps alive, so that it would be wise not to go forward until daylight; which they all thought very sensible, so they sat down and stayed where they were until dawn came. The elephant, being by now both completely alarmed and fed up, wandered silently back into the trees as softly and quietly as only elephants can, eventually coming back to where its keepers found it the following day.

When they got back to the village the following morning however, all the drunks gave a different account of why they were so late returning, and what it was that blocked the path. Then because nobody seemed to believe their story, the drunkards soon started to grow angry with one another. Each blaming the others for misleading everyone and not paying attention on the night before, which started a long argument about just what they met on the path that night. An argument which on one ever forgot and which just went on growing ever more heated as the years passed by, so that it is said that their descendants still argue about it even today, and the village has never really been a truly friendly place like it was since.

Well that's all of the story Sylvia. And why do I think it is one of the wisest stories ever told, not that I am a good judge of wisdom as you know? Well at its most basic level of course all that it tells you is what most people know. Which is basically that, when you are in search of something important like the truth there are many ways in which you can go wrong along the way, and especially many ways to reach a wrong conclusion in the end. So that conventional wisdom says quite rightly that, it is therefore always best to carry your opinions on everything with some humility, because even if you can prove quite conclusively, especially in your own mind, that everyone else is mistaken. Even being able to prove the falsehood of every other view point, it does not necessarily mean that your point of view is the right one. You may still be, despite that, just as far in error as everyone else.

It is true that there are many easy ways to be mistaken, and from that wise people conclude that if both humility and realism demand that we all must be prepared to regard ourselves as possibly wrong most of the time; then the ability to admit to ourselves when we are wrong, and correct ourselves, is perhaps the greatest strength there is. Plus the fact that since most if not all falsehoods contain a small amount of truth, in other words; an elephants trunk is just a bit like a snake, its ear somewhat like a hanging cloth etcetera; then all opinions must be considered seriously.

However some people then go too far, and conclude that this means that all opinions must be due equal respect, be of equal value, that no one is closer to the truth than anyone else; and even therefore, that the very idea of a final answer to any question, in other words, “the objective truth”, should be rejected along with any intention of pursuing it.

If you want to know; (though I am sure you don't), philosophers call such people 'relativists', and they can be very dangerous people, because of course relativism wearing another mask is liberal subjectivism, a mouthful but it means that all cultures and all beliefs must be treated as equal, and says that the demands of even the most lunatic fringe be respected as much as the views of the vast majority. In many ways, that is of course the great temptation of relativism, it seems so fair and so kind.

Yet sadly life, as you know, is never really fair, though that is no excuse for not trying to make it so. You will of course see how neatly the elephant story undermines the relativist, and shows up the little trap into which they fall. Because though each drunkard had both a little bit of the truth and a lot of error, meaning that each persons opinion requires, quite rightly, a little respect and also a little scepticism. Yet in the end there is still such a thing as a complete and whole elephant, just as there is but one world and one true way of understanding it, and even though it is most likely that no one will ever find it. Yet some, usually those who try hardest, and work at it, will be still be closer than others to true understanding. Just as the least drunk concluded that there could be something large alive and dangerous in the path, and therefore it was best to wait for morning before going home.

And one day perhaps someone from the village, will discover an elephant in broad daylight, especially if they go out looking with open eyes. Because that is the other sad thing about relativism and subjectivism, which is that they are anti-progress and growth, they are saying that there is no point in trying to improve, or going out looking for something better, which leads to a dull life for everyone. Though you won't have to show an interest in letters from old men any more.

One day two existentialists visited and learned what had been said and done. One of them said, “Aren’t you glad there are no more excuses?”

The other replied, “Yeah, people used to waste so much time.”

“Your agnostic/atheism is just a belief based on faith like mine.”

Atheism is a belief/religion, like not collecting stamps is a hobby. 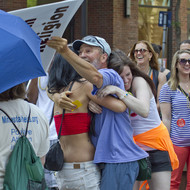 Never heard this story. I like it. The relativism in its application by progressives, means that questioning the harmful or ignorant/dangerous practices or beliefs of cultures or sub cultures makes you racist or xenophobic. Whereas, in reality, human rights should be extended to all people despite what their oppressive religious, cultural or national beliefs or policies would state otherwise.

Excellent...hadn’t heard this story before. Very good example to use to counter relativism.