This popped up on FB today. What do you think? 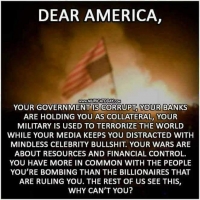 Like the others I see here have posted, I believe this is pretty accurate. I also think that it is something that will not be changed easily or quickly, and that we cannot simply "vote this problem away." That being said, I do think that voting is important, because even if both political parties are at least somewhat beholden to their wealthy masters, I do think that one of those parties is maybe a little less so and every once in a while somebody special comes along that can change things. If you go by the philosophy that both parties are the different sides of the same coin, and use that as an excuse not to vote, you will definitely never see change. Our elections are decided by approximately 25%-30%, or less of the eligible voting population and that makes it easy for them to put their puppets in place. If all, or most of our eligible voting population would actually vote, I believe we could make substantial changes. The people would have the power over the moneyed population.

I agree, not nearly enough people vote. And unfortunately some of the new voting registration requirements are not making it any easier.

@BeeHappy you are making a start by posting this. If everyone takes it and shares it in their network and so on down the line perhaps sufficient people will be empowered to create change. Well done.

I agree and I think many feel that way, but if we do nothing, then what?

It could be better than doing something harmful? @BeeHappy

Don't vote for the perpetrators vote for the Green Party Candidate proven to stand against the war criminals banksters polluters and billionaires. ...We don't grab pussy like TrumpOLINI nor sell Uranium to Warsaw Pact nations opposed to NATO like Billary did

@GreenAtheist Yes, at minimum we can at least vote for what we want, if we are not seduced into "lesser evil" nonsense.

@skado "It could be better than doing something harmful?" I'm not so sure about that. Even as bad as Trump is, I'm hoping it's been a wake-up call for some. I think NO action is worse.

@BeeHappy OK, are you saying no action is worse than harmful action?

@skado I'm saying it has the potential to be worse. We don't take action or inaction knowing it will be harmful, most times we don't know until after the fact. If that's the case, I will say action is better than no action. We are speaking in general terms, so there will always be exceptions to the rule.

...it pretty accurately describes ‘why’ many can’t see it.. But we’re #1 - We’re #1! ...aren’t we..? Aren’t we what every other nation wants to be? Aren’t they all jealous of us - of our Freedoms! Haven’t we been Blessed from above by The Almighty?! Aren’t others risking their lives daily to get into Our Country? Don’t we have the most powerful Military in Earth's History?! Again - are we not the envy of All?!

..so ashamed… Could have been so much more.. Back in the 80’s ‘I’d suggested’ we learn to live with less, and with that, would likely sustain ourselves for perpetuity ‘just a little bit above the rest.’ We even had a president suggesting the same, he lasted one term … and it’s been a race to the bottom ever since. When your college educated youth can recite the entry requirements to ten different nations - your nation is fucked up

Please clarify.... are you suggesting that the nation is fucked up, in part, because our college graduates are from different countries?

@BeeHappy ...noooo, the college students I attempted to describe are ‘my own,’ my 2 daughters having graduated last June … both capable of reciting the entry requirements to other nations.. They’re likely representing the national brain drain this ‘one nation, under god’ has set itself up for... I foresee a major drop in enrollment to our universities in the very near future..

Unfortunately I find this pretty accurate ...

Are we greater yet ?

Wow the truth hurts. This is what our allies are saying.

Probably more true than you would like to think...

You can include a link to this post in your posts and comments by including the text q:15756
Agnostic does not evaluate or guarantee the accuracy of any content. Read full disclaimer.