With COVID-19 and now abortion, WA is Idaho’s civilization. Can that hold?

The pandemic fractured America. It exposed, and then accelerated, the widening of some cultural and political chasms between the red areas of the country and the blue.

The hope was that as the disease crisis subsided, these cracks might shrink back to something more resembling “normal.”

But what if a larger seismic event has been triggered that now can’t be, or won’t be, stopped?

I’ve been wondering this with respect to our neighboring red state, Idaho.

Unvaccinated and unmasked Covid-19 patients shipped from Idaho to WA.

Recently the news came out over there that during the delta phase of the pandemic last fall, Idaho in desperation had shipped more than 2,000 patients to Washington because its hospitals were so overwhelmed with unvaccinated COVID-19 sufferers that they had to ration medical care.

“During this period, Washington Gov. Jay Inslee criticized Idaho’s leadership for ‘clogging up’ his state’s hospitals,” the Idaho Capital Sun reported. “Data from Idaho’s and Washington’s health departments back up this criticism.”

The news organization looked at patient-transfer data and found that, even as Idaho’s Republican political leaders resisted many COVID control measures and the state was among the worst for getting vaccinated, its sick residents were being exported for care to hospitals here, mostly in Spokane but also to both Harborview and the UW Medical Center in Seattle.

This had a predictable ripple effect.

“Today in my state, Washington citizens in many cases cannot get heart surgery, cannot get cancer surgery that they need, because we are having to take too many people of unvaccinated nature and unmasked, many of whom come from Idaho, and that’s just maddening frankly,” Inslee said at the time.

Last fall my inbox was jammed with stories from Seattle-area patients whose appointments here had been delayed or outright canceled.

“Am I angry? You bet I am,” wrote one Snohomish man whose cardiac surgery had been put off indefinitely last fall.

In addition to being maddening, at times this refusal to deal with medical reality was deadly. An Idaho doctor described waiting so long for a transfer bed to open up that his COVID patient died. It’s likely one of the reasons Idaho’s death rate from COVID is 75% higher than Washington’s.

It shows how far we are from universal health care, where you get treated no matter where you live or how much money you make.

I’m recounting this tale of political malpractice because, incredibly, it’s all about to be repeated — except with abortion this time.

Underground railroad is forming, only for women's health care.

Idaho lawmakers just banned abortions there after about six weeks of pregnancy. They added one of those vigilante clauses that deputizes family members to sue doctors for damages. The law was stayed temporarily by the courts last week, but it’s similar to a Texas law that the U.S. Supreme Court allowed to stand.

Already Idaho women are coming to clinics in Washington. A reproductive care clinic in Pullman reports 43% of its patients now are from Idaho. This past week, Planned Parenthood began renting space near the Idaho border in Oregon to get ready for women making abortion treks over from Boise.

Idahoan demand for abortions here is expected to increase fourfold if the ban is upheld there, according to a forecast from an institute that studies reproductive health care.

Going across borders to get medical care may feel like a scene in a dystopian novel. But we just did the same thing with Idaho COVID patients — and the political establishment in Idaho doesn’t seem the least bit chagrined by the experience.

Women’s health advocates here, to their credit, are gearing up as if for refugee relief, offering to help pay travel, lodging and other costs for Idaho women.

“We are, right now, working to stabilize all of our health centers … and ensuring that patients who need abortion access in Washington, we will be here for them to get it,” the head of Planned Parenthood Great Northwest said in Seattle recently.

It’s like an underground railroad is forming, only for women’s health care.

This will lead to the same delays and rationing of services as happened with COVID last fall. That’s already been the case around Texas, as clinics in neighbor states reported an 800% increase in Texas patients, with wait times growing to more than a month. 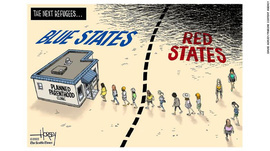 The health care issue was a problem even before COVID. Like ALL republican led areas they refuse to spend on expanded infrastructure. Idaho has the minimum amount of hospitals and clinics; all the good stuff gets provided by WA State. All the public funded spending is because or from the wealthy west side of the state which brings in the dollars. The republicans I know around here really do not understand how funding works on both a state and federal level.
Of course he's disgraced now but during the early days NY governor Cuomo called out mitch mcconnell and publicly explained the reality of federal funding. Cuomo was asking for extra federal help for the city as it was overwhelmed and state tax money was not enough. Tax dollars go into a big pot and states can take out what they need, thing is for over a decade NY State put more in that federal pot than it ever took out - year to year! Moscow mitch's state on the other hand has ALWAYS taken out more than it ever puts in. But that never was aired on fox, oann or any right wing media sight.
The one small hospital here in Ellensburg at one point has no beds available. Surgeries canceled, clinic visits had long waits to get an appointment, etc. Yeah the stupid just keeps pilin' up.

What the women are wanting here is an expected outcome. What the Republicans are doing is so criminal that they even want to offer you money to report the women who cross over to a clinic. Surprise! Susie is a witch. I saw her with that devil. We better watch it. Next, the sperm leaked out and Charlie saw that so now we have to have a funeral.

Educational article for me. I didn't realize how much of an impact Idaho was having on healthcare delivery in Washington, besides the additional expense of people having to go to another state for healthcare! And a month's delay in many cases is unacceptable.

In 2020, almost 10,000 out-of-state visitors came to Illinois for abortions. The number has been jumping up every year. Red state women and allies have to say enough! in November.

I refuse to hike in Idaho. Never again. It was scary.

Loud anti-liberal rednecks with guns getting drunk at campsites.

That’s always been a part of ‘Redneck’ culture. ‘God, Guns, Country. That has mostly centered around MANY rural areas of the country, North, South, East and West. A friend of mine who visits his girlfriend in Pennsylvania in a rural area heavily dominated by Jehovahs witnesses is one example…….some of beliefs from place to place differ, but the fanaticism is always the same.

Thank you for this. There was no paper today and I always read Danny Westneat. It seems the further east and away from the sea one goes the redder it becomes. Even Eastern Washington is purple. A doctor on Lopez was involved with the endoflifewashington program and a lot of her time was spent signing as the consulting doctor for the DwD program. There was a dearth of them in Central and Eastern Wash. Now it can be done through Skype and she has more time to help advise locals (as us) in her own home turf.Seems a wall across the southern border is misguided. It needs to be between the sane and insane regions of this country. Oh and let them pay for it lol.

Republicans are becoming the American Taliban more and more with every law they pass. Oppressing women, LGBTQ+, immigrants, undesirable voters, scientists, and even the literate with their book banning. November 2022 is going to be a dangerous and pivotal point in Americans future history in my opinion.

I will be dragging people to the polls again this November. We need to convince our people that every vote needs to be cast.

I learned a few years ago that a woman I worked with here in AZ was from rural Idaho and had a history with a well-to-do LDS family whose name I recognized. One of their people taught wood shop at our rural AZ jr high school.
Her story rang very true and was too easy to believe.

When I knew her here, she was still recovering emotionally and openly admitted that she considered herself lucky to escape from the Idaho situation. I don't think I've heard anything positive socially about Idaho so we've been staying away from it just as a matter of habit.

You can include a link to this post in your posts and comments by including the text q:661379
Agnostic does not evaluate or guarantee the accuracy of any content. Read full disclaimer.