That is ruff, really ruff-ruff

@SeaGreenEyez
Not at all. It’s comical as hell. It’s genuinely funny.

Amazing! But with no proof of who the minister really is some certificates I have heard of have a dog's name listed as performing the ceremony. This might be because the certificate is only proof that the license fee was paid.

Same here in Hawaii, no witnesses needed. In fact they've removed the witness signature boxes (which were optional anyway) in favor of phone number and email address of the couple.

I often jokingly tell my couples they've got Puff the Magic Dragon (around Hanalei Bay) or various whales, sea turtles and monk seals that make their presence known as their witnesses, but we don't try to get their flipper print on the certificate, haha!

Rather have a dog than a republican know what I mean 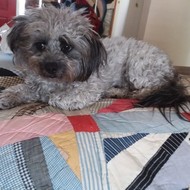 You can include a link to this post in your posts and comments by including the text q:666198
Agnostic does not evaluate or guarantee the accuracy of any content. Read full disclaimer.