We rely on members to let us know when posts contain content that violiate the community guidelines. The most common reason that content gets flagged is that it contains dehumanizing or trolling/baiting text. Getting too many flagged posts will result in account termination.
Visit Group Join Group
3 18

We promised our two monsters. And we'll keep that promise. 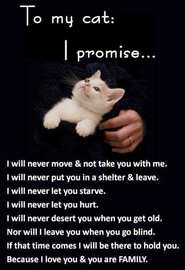 I will never let you walk on the key board.

I appreciate and agree with all but the assertion: "I will never let you hut."

Does anyone have the absolute power to prevent another life from experiencing the stage of "hurt"?

I know several who place the health of her pets above their own needs yet they were not able to prevent their pets from accidentally getting severely hurt. In once case, her horse became tangled and severely cut by barb wire. Putting it down (after much blood loss then infections the vets gave her no other option) nearly killed her. She had it buried in her back yard (that a year later became flooded for decades when the terminal lake grew and destroyed her house). In another less traumatic case, a different woman's show dog ran into something and somehow managed to pop her (the dog's) eye out. I am guessing that hurt.

Maybe they mean "cause you to hurt" instead?

That's the way it should be!

Posted by snytiger6Meanwhile inside the box, Schrodinger's cat...

Posted by RobertNappi2Happy Mothers Day all

Posted by bigpawbulletsWe do talk about our first cat, now long gone, and tell the current two about him. I still miss him.

Posted by RobertNappi2I'm a day late!!!