We rely on members to let us know when posts contain content that violiate the community guidelines. The most common reason that content gets flagged is that it contains dehumanizing or trolling/baiting text. Getting too many flagged posts will result in account termination.
Visit Group Join Group
8 12

Originally I took on Ramses as he was adopted by people that did not have the patience for him and threatened to put him down. He acted aggressive at first, he bit me several times. But after a few months with me he calmed down and is a cuddler now. It’s understandable that he was aggressive. He was an elderly person’s cat until they passed and then thrust into a new home with new people. He needed to adjust. Well he is happy now and they didn’t deserve him.

Then I got Cleopatra she was the runt of the liter and left behind. Of course I took her. She now runs the house.

Then July 5 2017 I was in the Home Depot parking lot and heard a strange noise. I thought a bird was hurt at first (I’ve saved a few that ended up stuck or trapped in shopping carts). But not this time. No I found an itty bitty white thing mewing in the parking lot. I don’t know how he got there or how long or how he was not ran over or dead from the heat but he was there and alive. I happened to have clothing for donation in my car so I took out a shirt and wrapped him up. I hunted around the parking lot, the garden center and the sheds on display for more or for the mama. Nothing. So fast forward through the bottle feeding. He is now super spoiled and greets me when I get home by jumping on me (without using claws) and I will catch him and he nuzzles me.

Then this past December I found a box taped shut with a mama cat and two kittens. So of course they came home.

They have a room in my house they faces the quarter acre backyard so I am working on building a large catio for them that connects to their window. 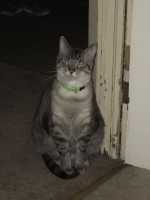 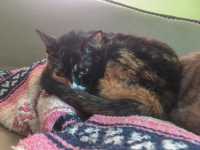 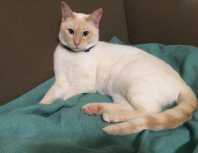 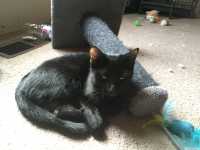 I took in a stray male. I won his trust by not looking directly at him when I went outside. I could sit near him and he learned to trust that I was not going to chase him away. I also got him accustomed to my closing the door behind him, this would psyche him out! Fast forward, he is now a 100% indoor cat due to him being attacked by a large animal and a very expensive veterinarian bill.

Thank you for sharing. It takes a special person to gather a beautiful family like you have.

I love it that you named your cats after Egyptian Deities.
The white one looks like a seal point.

Lovely. You made my day.

What beauties. Neat names, too. (:

I named my first Abyssinian cat Isis Sekhmet back in '82. Always thought to name a black greyhound Anubis, too, if I ever get one. (:

True blessings from real divine rulers of our cat homes.....BO HA KI Egyptian for cat where there are more cat mummies than people mummies. ...my Laila and Kiti SERVICE CATS love me bless me 50 months 10 days now

@MeriMaat I am told BO HA KI is associated with cat drawings but translates : " DIVINE RULER of the HOUSE ancient Egyptian homes and burial entombments of mummified cats with people

Posted by phxbillceeCat pilot, how high can you fly...

Posted by snytiger6I wouldn't stand there if I were you....

Posted by snytiger6My side, your side.

Posted by snytiger6I'll just get some food from that camp... what could go wrong?

Posted by snytiger6I dream of a world where...