In a fiery speech, arguing that impeachment would disenfranchise Donald Trump’s supporters, defense lawyer David Schoen is being harshly criticized for his thinly veiled threat - warning that impeaching the former president could very well result in even more violence from Donald Trump’s easily enraged base.

So, if I understand Schoen’s argument correctly, it sounds as if he’s implying that “if you bring Trump to trial, then that angry, violent mob who attacked the Capitol, wanting to hang Vice President Pence and kill various members of Congress, might get really, really mad again - and there will be reprisals.”

You know, we’re talking stuff like ”Nice country you have here - be a damn shame if something were to happen to it!” In other words, Schoen’s trying to incite violence, in defense of a man who’s facing trial - over inciting violence. They don’t teach you that in law school.

Now, is it just me, or does threatening civil war if your client is put on trial - sound more like a speech you’d wanna give to folks at a QAnon rally, rather than in a courtroom? A pretty strange defense strategy if you ask me - even for a Trump lawyer.

That said, and on a positive note, at least Schoen is finally acknowledging what most of us already knew, that Trump’s base is primarily composed of “domestic terrorists.

Makes you wonder, just what the hell Schoen might propose next? Perhaps arranging for US officials to meet with Trump and his band of heavily-armed militia leaders for “peace talks” at Camp David?

All I can say is, after watching Trump’s two impeachment shysters Castor and Schoen in action, it really makes you wonder - just why more folks don’t “love and cherish” the lawyers who operate throughout the back rooms of this great land of ours. 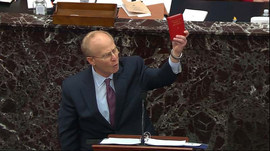 The Hitler argument - didnt work then either.

The guy sounded like the mob lawyer he is.