Alabama’s House of Representatives just passed a bill by a vote of 73-to-25, which would lift over a quarter-century ban on teaching Yoga in its public schools. This is a ban that was first implemented back in 1993, due to various conservative group’s opposition to its Hindu roots. That said, using classic yoga terms such as “namaste,” will still not be permitted under the new bill.

Well, well - my goodness gracious! That’s almost enough to make ya think that these good ole Ramma, Bamma, Bamma, Ding-Dongs - have themselves been practicing some of that good old “cancel culture,” - you know, that stuff they constantly whine about all day long over on Fox News. Why, it’s no wonder these folks hate Yankees so much - hell, they once had a catcher named “Yogi Berra.”

And, to think all this nonsense is coming from a state that nearly elected serial child sex predator Roy Moore to the United States Senate just a few years back. Of course, when it comes down to teaching yoga in the public schools, now that’s where these folks draw the line. Now, this is 2021 and not 1921 - right? I had to ask.

Hey, perhaps these yoga teachers ought to consider approaching all this in a manner that even folks from Alabama could understand - you know, like greeting them with a “Namaste, y’all!” In fact, why not just tell them that “namaste” isn’t really some “foreign term,” but actually a new square dance move? Hell, they’d never know the difference.

Let’s put it this way, I sure don’t wanna have to be the one to try and explain to them that Christianity began in the Middle East - and not right here in the USA. All I know is, every time I see the word “Alabama” or “Mississippi” printed somewhere, I suddenly hear the sound of “dueling banjos” ringing throughout my ears. 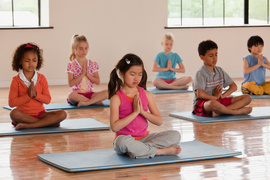 The religious idiots didn't want Hindu religion to compete with Christianity. In fact all religions are frauds.

Just read about that and am still shaking my head at the stupidity of so many southern states. Sometimes it seems the civil war has never ended.

Most of the Deep South is full of these idiots who come up with this kind of craziness! So glad I’m outta Texas!!

Thank goodness their stupid levels are lowering, long may it continue.

I see the Alabama legislators are staying active with important issues like yoga and the other issue they are also working on, making it official that ex president tRump be recognized by Alabama as one of the best presidents ever.

I fled Alabama in 1990 as a refuge and settled in America.
I didn't even know about this, but I say "Namaste" all the time, but to be honest my favorite Yoga has fruit on the bottom.