Georgia’s Republican Gov. Brian Kemp has signed into law an extremely controversial and sweeping voting measure, that Republicans claim is necessary to finally put a stop to voter fraud, but critics say it will ultimately lead to long lines, partisan control of elections and more difficult procedures for voters trying to cast their ballots by mail. The bill also criminalizes any third-party groups who try and provide water or snacks to voters in line.

Now, who could possibly find anything wrong with Georgia’s Republicans ensuring that precincts in minority communities will have waits of up to 8-10 hours in order to vote? Or, with making it a crime for volunteers to provide water or snacks to those stuck in those long lines for all that time? I mean, just think of it as a wonderful opportunity to get to catch up on what’s new with all your friends and neighbors.

Of course, they’ll always be those damn skeptics who’ll argue that if a U.S. combat soldier captures an enemy soldier, the Geneva Convention requires them to at least provide that enemy soldier with water - so why wouldn’t we extend that same humanitarian compassion toward our own American voters?

Well, the answer to that is this is Georgia, and Georgia’s state politics are primarily run by Republicans who don’t want no damn stinking “humanitarianism.” They want “liberty!” And “liberty” means the God-given right of every Republican candidate get to elected or reelected - by any means necessary.

Hey, I think I’ve got an idea! How about having all those folks delivering the bottled water and snacks to thirsty voters - wear military fatigues and have AR-15s strapped over their shoulders instead of wearing their usual clothes? Hell, that ought to be enough to completely confuse any Georgia Republicans and their enforcers.

Why, I can see it all now - - COP: You aren’t carrying any water or snacks in that backpack are you fella? POLL VOLUNTEER: No sir, officer! Just guns and lots and lots of ammo. COP: OK, then - go on ahead son. And, thank you for your patriotism. You see, Georgia Republicans have concluded that the only way to truly prevent “voter fraud,” is to prevent most citizens from voting. Why, who said Lester Maddox is dead? 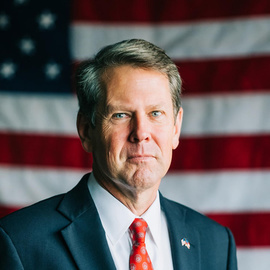 
*As such all protestors and election day rule breakers will be moved on and/or arrested and subject to fines of up to $999,999,99 and or sixty year incarceration.

How is it “voter suppression”?

Seems like the rules for federal elections should be standardized across all states.

Also, Americans should get there heads out of their asses. Why limit it to Election Day, why not election week?