FBI Warned Giuliani He was Target of a Russian Influence Operation

It’s being reported that the FBI warned Rudy Giuliani, Sen. Ron Johnson (R-Wis.), and conservative media outlets such as One America News (OAN) in late 2019, that they were the target of a Russian influence operation - aimed at circulating lies intended to damage Joe Biden politically in order to influence the outcome of the 2020 election.

Perhaps, but no matter how much evidence the Feds may have on him, Giuliani may end up proving to be an extremely difficult person to prosecute in court. That’s because he’s consistently shown time after time that he’s capable of cutting some of the nastiest farts imaginable while being questioned on the witness stand - thereby making cross-examination nearly impossible without sophisticated respiratory equipment.

I mean, given these new revelations, one does have to ask, just who in the hell would continue having contact with Russian operatives, after they’ve been warned by the FBI that they’re being watched? Seems that Trump, Rudy, Ron Johnson and all these other wannabe mobsters - aren’t really gangsters like those “Goodfellas,” they’re more like a bunch of “Dumbfellas.”

Not surprisingly, Rudy immediately went on Tucker Carlson’s show to warn listeners that “if they can do this to me, you could be next!” No Rudy, I'm pretty sure that I'm not gonna be next. I mean, about the closest contact I ever have with Russia, is when I pour a little of Russian dressing over my salad at lunch. It would never occur to me to try and invade Ukraine.

Speaking of which, Rudy followed all that up with even more insanity, causing poor Tucker to once again display that patented look of confusion all over his face. Of course, and in all fairness, one never knows if that bewildered look of his has anything to do with the subject being discussed, or if he’s simply dreaming about that Swanson TV Dinner waiting for him when he gets home.

Anyway, I suppose at this point in time and space, about the only question remaining to be answered is - will Rudy show up in court using a cane like Bill Cosby, or a walker like Harvey Weinstein? I suppose only time will tell. 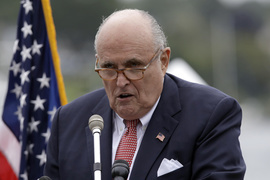