Arizona Republican “auditors” participating in a recount of the 2020 election in a last-ditch attempt to prove Donald Trump really won the election, report they’re now investigating “accusations” that 40,000 fake ballots were flown into Arizona from the southeast part of the world (Asia), and that those ballots were then stuffed into the ballot box. Chief auditor John Brakey told reporters that in order to prove their origin, they’ve been photographing these ballots up close with their 5K cellphone cameras, to try and detect if there is any telltale bamboo in the ballot paper - which they claim would be a “dead giveaway.”

Good grief, bamboo ballots being flown in directly from Asia - to cast votes for Joe Biden? Sounds like these Republicans have themselves a real “bamboozler” of a mystery to solve here. And, to make matters worse, “some people” are even suggesting these fraudulent ballots were marked using “India Ink.” Meanwhile, in an effort to avoid any appearance of racial animosity toward Asian people, Republicans say “auditors” are being encouraged to use chopsticks whenever handling these suspect ballots, just out of respect for where these ballots came from.

Now, before you laugh and try and dismiss all this as complete nonsense, it’s important to remember that these Arizona “auditors” deserve every bit as much credibility as any Flat Earth “researcher” should get. After all, these Republicans have pinpointed exactly where these fake ballots came from - “the southeast part of the world - Asia.” Rather difficult to argue when confronted with that kind of precise geographical information - now isn’t it? They’ll also tell you that just about anyone who knows anything about the region, will tell you that about the only paper they have in Asia - is made out of bamboo! Further proof that these “auditors” really know their stuff.

Now, Arizona isn’t alone in its election fraud concerns. We’ve had very similar issues right here in California this past election. Why, when I opened my 2020 mail-in ballot, I immediately suspected the damn thing was printed on “papyrus,” instead of good old American paper. Now, if a ballot printed on “papyrus” doesn’t sound like some kind of a “pyramid” scheme, then I don’t know what the hell does. All I can say is, leave it to George Soros to outsource election fraud to foreign countries. Come on people - if there’s fraud that needs to be committed, let’s “hire American!” 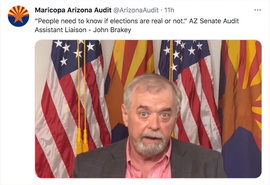 That dude a Trump crackhead..

The scary part is the people who believe this shit

Fucking idiots. Ties in with the ballots that were delivered by a North Korean submarine.

I live at the coast and I saw the submarine, It had a sign on the side which read, "Bogus votes for Biden from China." "If you see this please point the way to Arizona." I tried with my middle finger, do not worry they went up the Columbia River, they thought they would make their way to Arizona threw the Panama Canal. I waved them good luck.