We rely on members to let us know when posts contain content that violiate the community guidelines. The most common reason that content gets flagged is that it contains dehumanizing or trolling/baiting text. Getting too many flagged posts will result in account termination.
Visit Group Join Group
4 12

Of course, I’m sure many of you will sarcastically ask, who else but sleazy old “Fox News” would give voice to such a whining, self-centered, poster child of affluenza such as Eric Trump? Well, the short answer to that appears to be - Breitbart, Newsmax, One America News Network (OANN), and nearly all of talk radio, just to name just a few.

Anyway, just a thought Eric, but perhaps if you folks weren't committing “crime after crime after crime,” you wouldn’t be getting “subpoena after subpoena after subpoena.” You see, what Eric’s really pissed about is the fact that it seems about the only way to avoid legal repercussions these days, is to “not do anything illegal.” Why, these damn prosecutors are trying to “criminalize crime” for Pete’s sake! And, if that’s allowed to happen, you may as well just shut down the entire Trump Organization. Oh - OK, that sounds like a good start. 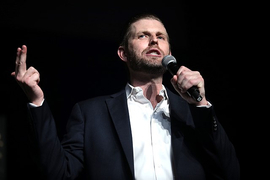 Did they really think they could piss Everybody off with no repercussions?
Oh, wait, if they had won the election & built concentration camps, I guess.....

Maybe if you Dad was not the scumbag he is, but then we'd be in a different world, wouldn't we?

The Trump syndicate seems to like they're outside " legalities" that we peons Must abide by, wait, that describes damn near every Rethug in the Congress..

Posted by johnnyrobishTrump Had to Be Blocked From Appointing Ivanka to Head Up World Bank The Intercept’s Ryan Grim and Max Ufberg say two sources told them that Donald Trump sought to appoint his daughter Ivanka to ...

Posted by phxbillceeJim Acosta to Andrew Yang: What the Hell Were You Doing on ‘Tucker Carlson’? [thedailybeast.com]