We rely on members to let us know when posts contain content that violiate the community guidelines. The most common reason that content gets flagged is that it contains dehumanizing or trolling/baiting text. Getting too many flagged posts will result in account termination.
Visit Group Join Group
9 9

Not only are conservative activists across the country increasingly targeting school curriculums surrounding topics such as racial inequality, women’s rights, and LGBTQ issues, but they’re additionally mounting a strong effort to rid school libraries of any books which they deem “inappropriate” - many going so far as demanding not only these books be removed, but also burned.

Frankly, I have to admit I’ve always found it rather amusing when Republicans demand we ban books. I mean, it isn’t as if they’ve ever read one or anything. And, gee - I thought conservatives were supposed to be against "cancel culture” and the “nanny state?” But, I get the message - “guns in school good, books bad!” Why, Kyle Rittenhouse wouldn’t be the MAGA hero he is today, had he not been exposed early on to the love of firearms.

Not surprisingly, leading the charge on much of this book banning and burning, is none other than good old Texas Gov. Greg Abbott. Of course, given the way Abbott and the Republicans have been handling that Texas electrical grid, Texans may soon have to burn books - just to keep warm for the winter. I like to think of it as sort of “The Bonfire of the Hannitys.”

Of course, there’s always a danger that Evangelical Christian Nationalist children may somehow get their hands on these “unapproved” books elsewhere, and end up “reading gay pornography instead what they’re supposed to be reading in school - which are books about Jesus.”

Frankly, it sounds like the only really safe solution to this threat is - just don’t teach your kids to read. Otherwise, you liable to one-day wake up and find yourself in a situation where your kids are crying “Daddy, why are you burning my Kindle?” 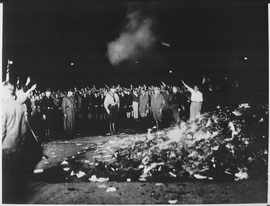 Nailed It ! Keep putting these Republiturds in office and get the Real Hell on Earth . And really, it’s not like any of these Fools can actually READ .

Can these idiots even read the books they want to burn?

As far as I am concerned as long as they pay for them, full price of course, go ahead. If I was to ever have a book published I would hope millions would want to burn them, paid for of course.

They do relate to Nazis

They may claim not to be Nazi, they may not even think they are Nazis, but book burner are fascist: defined and identified by their actions

Book Burning is the act of the fearful, they burn the book because they fear ideas
burning an idea is impossible without burning anyone and everyone who has ever thought it.
The religious tried this in the dark ages
it did not work
The political tried it time and time again
It did not work

Never burn a book, never trust anyone who advocates doing so

Did tours of Russia and USSR as an athlete and teaching sand sculpture to top sculptors a few times. Their society tried burning Bible's or anything religious and took over all the churches. Did it work? No. It's back as big as ever.

There were teachers in North America trying to banned Grimms fairy tale books. The kids said the Adults don't get it.
I here the same with kids saying about covid handling, the Politicains don't get it, don't govern me harder Daddy.
Kids are our future.

It is a shame upon mankind that our history has many book burnings of written things we are never able to see today. We may have lost a lot of knowledge through ignorant book burning.

No, you cannot have books about love, sex and caring for those who are around you. You must have books about war, rape, incest, murder and an unspeakably vile sky daddy, which is why the Bible is required reading for all impressionable young minds.

"Today's literature reading is about Lot. We shall start after Lot gets drunk and has sex with his daughters. Can anyone tell me how that was justified? Yes, Sandy? No, Sandy, it isn't rape, they instigated it. Right on Billy they believed they needed to be the world's new Eves. Blessed be the lord. Gold star for Billy. Sandy, get it together or no man will want you."

I think any counter protesters at a fire burning should bring bibles, and light those bitches up.

How about a pyre of all Rethuglican assholes in this world?

Begin burning bibles and the Xtards can claim you are no different from how they are, because you would not be.

@LenHazell53 That is true as they never would see the irony in that.

@LenHazell53 I make no apology for exercising the same "morality" towards those idiots as those idiots first exercised towards me. As @Beowulfsfriend suggests, they would be incapable of seeing the irony in that.

@anglophone There is no morality in burning books. Once you start to exercise and preach a judgement that any book should be censored, removed or burned, you are basically saying all books are up for censorial judgement if any one person objects to any one of them.
Books are the nearest thing to telepathy that we have, a medium for the transmission of thoughts and ideas. If you burn a book you are trying to burn an idea.
I would hope those who have found their way to this site are better than that, and not willing to sink to the depths of excremental thinking as the book burners wallow in.

@LenHazell53 "Morality" in quotes is morality with a heavy dose of sarcasm. You have no basis for suggesting that I support the burning of books or that I engage in excremental thinking.

@anglophone Beowulfes friend was advocating the burning of bibles, you appeared to be agreeing with him by suggesting a "pyre of all Rethuglican assholes"
If I misunderstood this, I apologise

Yes, that is another example of militant ignorance and militant stupidity.

Being an old history buff, I say leave the books and statues alone, let them deteriate on their own, like the Bible. We can always improve ourselves and help other better without them.
For much of history centrolatized systems like Politics and religions has been based on a lie anyways.

You need those self help books?, Well, just help yourself and think for yourself. I can take notes from any group or any book and it helps some. Yet 90% of my best learning came from touring the world and experiences, winning award rather than documents from teachers who don't do. Or political decisions of constant failure. I've worked with many billionaire and politicains, I know oneself is better off leading themselves and thinking for themselves. Which will happen a lot more in the future after covid wars.

Two US President have declared covid a war. They have spent on this cold war 50% more than the entire cost of the second world war combined. 10 trillion printed money more coming this dark winter. Everywhere I go most people warn me it's 99% covid deaths blamed on the unvaccinated. Where 80% of the covid deaths are in westernized countries where 70 to 85% are vaccinated. It's the vaxxers vs the in vaxxers. My place Canada like Australia is the world largest prison for unvaccinated. It's totally wiped out my sculpture industry. Can't date vaxxers, or take them out anywhere. Most jobs require vaccinated. All workout places, transportation air or road cancel. Cancelled entertainment, bars, cafes, restraunts, cinemas plus no assembly of anyone talking about covid or online about covid vaccinated hesitated. I could be shut down and arrested by talking to you, right now
Good thing I know the law better than most and they are breaking the law in the most discriminating way on every level ever that's ever recorded worldwide in human history.

@Castlepaloma where oh where to start..

Its a third world war, and like throughout human history. People will get sick and tired of all this vaccine abuse and toxic junk in a few years..Then look forward to, good times again.

Must say, laughing my ass off.from all the rediculous things the elitist get to make the public do.