Majorie Taylor Greene launched an attack on GOP House leader Kevin McCarthy (R-CA) this week, for not punishing the 13 Republicans who voted in favor of the infrastructure deal, with Rep. Greene insisting Republicans who voted for the bill should be stripped of their committee assignments. Greene especially singled out the ranking member of the House Homeland Security Committee John Katko (R-NY), asking incredulously "What's a guy up in New York have to do with Homeland Security?” Adding “Shouldn't it be someone down along the border?”

Well, while we’re speaking about “borders,” is it just me - or does it kind of sound like Rep. Greene might be “bordering” on insanity herself? I mean, perhaps someone ought to mention to her that - New York actually is a “border state.” You know, there’s that great big place just above it on the map - called Canada. Does she think the US only has “one side” on a map? Who knows, maybe Greene’s just not into maps. Either that, or else she flunked geography back in high school.

Of course, more likely - she feels the term “border security,” really only applies to countries that have “lots of brown people.” Hey, wait a minute! I have a cousin whose last name is “Brown.” Anyway, if I were MTG, I’d be deeply concerned about folks coming in from Canada. Why, let folks like that in, and the next thing you know, they’ll be teaching people to use that commie “metric system.”

Now, some may ask, how is it this insane person, with a meager 15% approval rating nationwide, got elected to Congress in the first place? I mean, what the hell is her district made up of anyway - primarily mental institutions? Why, she’s been stripped of all her committee assignments for promoting violence and hateful conspiracy theories, so why does she still get paid with taxpayer dollars, when so many honest Americans are struggling?

Well, the good news is, Rep. Greene has been gracious enough to return a substantial portion of her salary ($60,500 to date) back to the government - all from fines imposed for refusing to wear a mask while in the House chambers. Anyway, speaking of earning her salary, guess it’s time for Greene to get back to work, readying her future complaints about all the construction detours - when infrastructure repairs finally begin next spring. That should keep her MAGA fans happy. After all, she was elected to complain - not legislate. 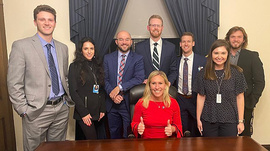 In a Just World this C**T would be sitting in a D. C. Jail Cell awaiting trial .

I always enjoy your stuff, but in this one you speak of her AS IF she is an actual human being......

The idiocy that pours out of her mouth is so toxic. Hopefully she won’t be re-elected! I am sick of seeing her ugly horse face too!

I'm hearing mixed reports about her district. Most say she'll be easily reelected, but she does have a challenger this time around.

@johnnyrobish Hope this challenger can keep going. The last one dropped out after the horse face witches supporters threatened his life.

That's right. I totally forgot that.

She’s a twat on a good day and a fascist insurrectionist on the rest. She should be in jail.