US Rep. Zoe Lofgren (D-Calif.) revealed that former Trump fundraiser Kimberly Guilfoyle was paid $60,000 for simply giving fiancée Donald Trump Jr. a three-minute introduction for his speech at the January 6th rally that preceded the Capitol riot. Members of the Jan.6th Committee used this payout to demonstrate the misleading marketing effort and grift run by the Trump campaign, which raised roughly $250 million in the weeks following the Nov. 3rd election, with promises of “a massive legal effort to uncover voter fraud.”

This - MAGA folks, is your “Stop the Steal” donations at work! Let’s see now - $60,000. That would be like 7500 MAGA Trump supporters donating a full hour of their Red State minimum wage salaries. Now, in all fairness to Kimberly - coming up with nice things to say while introducing Don Jr., had to be really fucking hard work.

Besides, it seems like a bargain, especially when you consider Trump paid Stormy Daniels $130,000 for what also turned out to be just three minutes of work. Gee, I wonder if that 60 grand is on top of what she's getting paid to date Don Jr.? Anyway, come on Libtards - show some compassion! All those grams of cocaine aren’t going to buy themselves, after all.

Now, is it just me, or does this seem like a real-life, “Let them eat cake” moment? Of course, because they’re Trump supporters, “Let them eat grits” should work too. You see folks, Kimberly Guilfoyle’s support for causes doesn’t come cheap. Not to mention, that Trump’s whole “Stop the Steal” show, really functioned more like a “License To Steal.” Why, imagine that! Turns out the folks with the biggest contempt for Trump voters - is the Trump family. 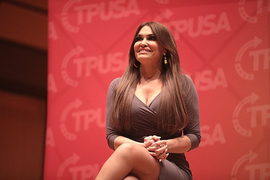 I don't get Guilfoyle's allure. She is a trashy bitch, and yet prior to Jr, and before joining the repucks she was California's governor's squeeze.

I’ve never understood her appeal to any man, let alone Gavin Newsom. WTF was he thinking????

Are you referring to Arnold the Governator, as the previous Cali guv?

@Beowulfsfriend I thought Newsom was gay..

@TomMcGiverin Not that I've heard. Apparently a bit of a playboy.

@Beowulfsfriend Well, there's a tradition of that with Cali governors, Arnold, Jerry Brown, and now him.. I looked her up on Wiki, and she's clearly a starfucker, cozies up to rich, famous men. The fact that she went straight from Newsom to working for Fox News shows she has no convictions about politics and maybe also says that neither does Newsom, to have married someone who made that kind of rapid switch. Confirms my cynicism that pols of both parties merely see politics as a game or something like being an actor, where they play the part and behind the scenes serve the agenda of their real masters. So in the face of that, it isn't surprising that their partners would be fairly apolitical as far as having any real convictions either, as far as actually being loyal to one party over the other.

They stay with the party that best serves their personal ambitions.