We rely on members to let us know when posts contain content that violiate the community guidelines. The most common reason that content gets flagged is that it contains dehumanizing or trolling/baiting text. Getting too many flagged posts will result in account termination.
Visit Group Join Group
2 10

Rep. Lauren Boebert (R-CO) told host Sebastian Gorka during a recent Newsmax interview, that if the Democrat Party is allowed to take away all your “AR-15s and your AK-47s,” we will end up like Venezuela where they started eating their dogs because the government took away their guns.

Now, as many of you know, I’m often a critic, but this time I have to admit Ms. Boebert is right on the money! Frankly, it kind of makes me wonder why no one else has ever thought about anything like this before. In fact, word on the street has it that after learning about the Boebert interview, a helluva lot of dogs are asking themselves why they only have a bunch of useless, chewable rubber toys to play with, but no AK-47s.

Obviously, the only logical thing to do is immediately arm each and every American dog with an assault rifle, along with plenty of rounds of live ammo. As for protecting the dogs of Venezuela, a quick solution might be for Rep. Boebert to consider sending some of her huge personal stash of assault weapons down to Venezuela’s dogs, just to get things started.

One thing’s for sure, if every single dog in the US is heavily armed, no one will even dare try and eat them - especially Democrat Party hacks like Nancy Pelosi and Chuck Schumer. As the NRA might put it, “the country will be one helluva lot better off - once we start seeing more ‘Goooood Dogs’ with a gun.” You know, with logic like that, it makes you wonder why Boebert isn’t advising the Herschel Walker campaign? Talk about a perfect fit!

Meanwhile, until Rep. Boebert’s plan comes to fruition, next time any Los Angelenos head over to Dodger Stadium and decide to partake in one of those world-famous “Dodger Dogs,” I suggest they better think twice about what the hell they may be eating. All of that aside, the really sad thing is that eating stray dogs is probably a helluva lot safer choice, than eating anything ever served at Boebert’s restaurant. 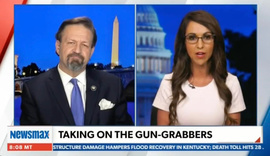 It's funny how anything said by any Rethuglican causes me to go into gales of laughter.

The question is, is your dog safe from others who want to eat him? Better get him his AR-15 so he can protect himself while you’re at work.