How to deal with capitalist.. 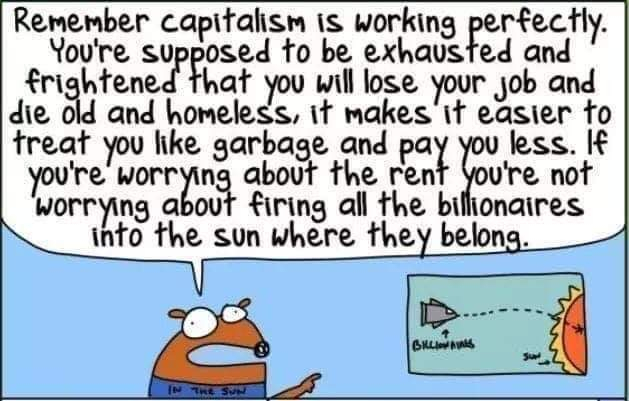 There are some features of capitalism that are good, individual businesses etc. I am in favor of employee owned businesses. There is a sense of ownership and shared rewards,

The advent of television certainly has amplified this. When television came in, people had spent less time with friends.

Better all together for Terra Protectivity. Terramunity united! 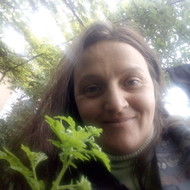 This is an extreme negative view of capitalism.

The problem we have is not capitalism. It is 'uncontrolled capitalism'. American capitalism has run amok. Nobody is held accountable for wrong doing, price gouging, exploitation, law breaking, not playing by the rules, over accumulation of wealth, controlling levers of democracy and so on.

This is a common view of blaming the philosophy, blaming a system or software, blaming a business process, or blaming a relationship.... when the real problem is where it is badly implemented. ERP software is a great example. It is given as the car chassis with the basic framework with all bells and whistles with very useful but complex logic and processes built inside -- all in one place. The software maker expect the client to understand and implement it properly. When it is not, guess whose fault it is? It is always the software. Wrong implementations is a common case with large software.

It is the same with a business process, a philosophy, a relationship. Human beings have a special knack of screwing very good things. Just look at the beautifully written American Constitution that we praise the wisdom of our founding fathers so much. Why is our democracy not working for American people? Why are so many people dying without appropriate medical care? Why is it so un-affordable? Why are the rich getting richer?

Talking about constitution. Do you know which was the best written constitution in the world? It was not of the UK or the US. It was of the former USSR. Yes, the of the evil communist empire of the red USSR. It included the best rights and protections for the common man, the worker, the teacher, builder and all at the bottom. But what happened? It proved to be the worst implemented constitution where people ended up in being sent to Siberia for just opposing a government idea. No right, no voice and no justice.

Don't join the chorus of others in blaming something mindlessly. Research what the point is, is it right? If you do not do that, you are spreading a rumor.

It’s a joke, I laughed

But yes, I’d consider myself a progressive capitalist that thinks ethics should be strongly incorporated into the existing system to make it work properly.
Not just by companies either, by consumers. Not that I believe the market is consumer led, but we should care about our actions and their impacts as responsible adults. (Zzz).

But this is Exactly how it is being implemented .
This will Continue until a Major Depression and there will be a Rebellion of Monumental Proportions . Another French Revolution .

The problem is Corporation-ism not capitalism.

Capitalism is just free trade, Corporation-ism is where millionaire and billionaire's are who we should be giving a one-way ticket to the Sun.

@Charlene He has not idea how ironically stupid this is.

@thexter yeah..that's why I didn't respond, he's buried deep in it..

I could go on for many pages on all the huge differences between Corporation-ism and capitalism. When people don't understand the great difference of the corruption of wealthy large corporations. large Corporations will always keep the general public in ignorance conflicts of fighting each othe. Wail they, keep walking away with the money, everytime.

@Castlepaloma Could you expand on this idea?

Keep in mind a President is a leader of a corporation, not of a country. Trump is President of the UScorp. The largest Corporation in the world is the US military complex.

Corporatism comes out of Capitalism

Corporation ism should be revamped for the survival of most earthlings and us.

Capitalism can be controlled or mixed with other society systems.