We rely on members to let us know when posts contain content that violiate the community guidelines. The most common reason that content gets flagged is that it contains dehumanizing or trolling/baiting text. Getting too many flagged posts will result in account termination.
Visit Group Join Group
1 2

Bill Barr’s U.S. Justice Department is seeking to take over Donald Trump’s defense in a defamation lawsuit from a writer who accused him of rape, while additionally instructing federal lawyers to ask the court to allow a move which could very likely put American taxpayers on the hook for any money she might be awarded.

So, US Attorney General Barr wants to order the Department of Justice to represent Donald Trump, in a lawsuit over something that happened long before he was ever even elected? Hell, and while they’re at it, why not just use HUD employees to answer the maintenance calls at Trump hotels?

Anyway, if I’m understanding Attorney General Barr’s interpretation of the law correctly, Donald Trump is now not only “President” of the United States - but has also literally “become” the United States. And the US Department of Justice? Simply a sub-division of the greater Trump Organization.

Now, what I don’t quite get is, President Trump has been paying for many of these so-called “unexpected expenses,” by simply siphoning off money he secretly snags from his political campaign coffers. I suppose this means all that sweet campaign loot, must be darn close to being tapped out.

Oh well, I’m quite sure the tens of millions of Americans who’ve lost their jobs during the Trump presidency, would be more than happy to surrender their hard-earned taxpayer dollars to defend a self-admitted sexual predator in a rape case.

Of course - only if Republicans in turn promise to do everything they possibly can - to deny extending lifesaving unemployment benefits, eviction moratoriums, and other aid - to America’s working families. 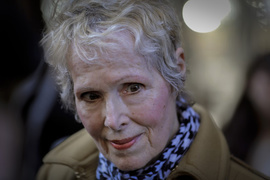 Yes, it is similar to saying that a company is "a person", also not so.