We rely on members to let us know when posts contain content that violiate the community guidelines. The most common reason that content gets flagged is that it contains dehumanizing or trolling/baiting text. Getting too many flagged posts will result in account termination.
4 0

I feel most science fiction cannot actually deny it's religious roots, though it has moved past them now.
Look at the major sci-Fi themes

1 Man in to space (The search for the heavens)
1a Star Wars (The war in heaven angels and demons)
2 The Aliens are coming (The 7 year tribulation, man against demons)
3 Robots/AI/ Artificial life (man playing god and creating in his own image, then losing control of it)
4 Post apocalyptic distopian future (speaks for itself)
5 Time Travel (The quest for the source and the ultimate destination)
6 Superpowers (Apotheosis and avatars)
7 Man supplanted by beasts is possibly the only exception as this a fearful scenario exclusively seen as rooting itself in evolution.

Is this perhaps the root of the "Mad scientist" trope(See below, for spot the difference)
What are your thoughts? 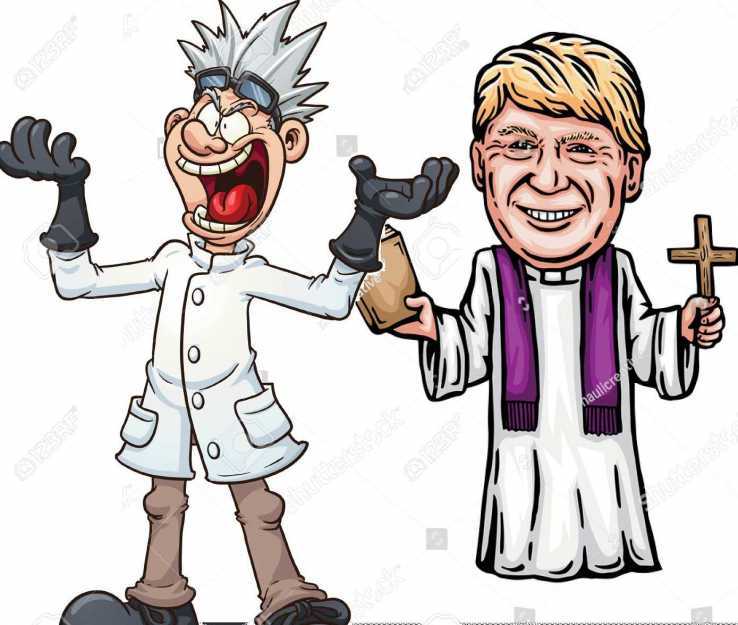 There was a time when to get published you needed the “nil obstat” and “imprimatur”of the church otherwise burning at the stake or worse could result. All such literature conformed to religion per force. Once separation of church and state became common literature did not need to be religious.

Mmmmm... I don't think you can explore something as open ended as SF without invoking a sense of awe pretty close to a religious experience... That's a different thing to an actual religion though...

Both religion and science fiction are narratives. In Fact most ancient epics (before Novels) were about religious topics. Narrative and myth deal with human universal themes such as birth, death, love, friendship, belief, society, community, creation, destruction. In the end narrative is sociocultural construction restrained by cognitive mechanism in the brain. Science fiction is modern narrative that attempts to deal with technological change and how if affects our humanity. So you could say Science Fiction is secular narrative instead of relation ship between humans and God/Goddess/Gods/Spirits/Demons it deals with the relationship between humans and technology. Sometimes the technology is so powerful that it replaces functions that in primitive and ancient societies were attributed to Gods or Spirits.
If you write about terraforming you have to deal with themes of creation and order and function of a creation, and how the power affects humanity.
If you write about technology that prolongs lifespan to immortality you are achieving divine status since only Gods were immortal in ancient religions or only God could provide immortality.
So there are gonna be similarities because they are both narratives that deal with human universal themes.
In fact I would argue that a good Science Fiction novel needs to have similarities with Religion, these means the novel is dealing with deep human universal themes, but instead of Gods the power and the consequences of that power and the relationship with humanity is with technology and science. God is dead but not humanity and the universal themes that affect humans such as love, decency, good, death.

There is such a thing as searching too hard for connections. Beyond the similarity of “the stars” and “the heavens”, which to me feels mostly coincidental, I don’t think there often are religious themes in science fiction, and to connect the dots feels to me like stretching a point.

There are a few obvious exceptions such as Frank Herbert’s Dune novels, where religion plays a central role, but I can’t think of very many.