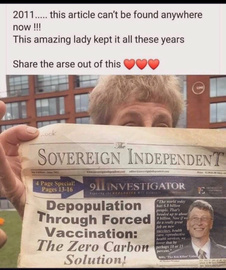 "The quote from the 2010 TED Talk has repeatedly been taken out of context to suggest Mr Gates wants to reduce the world population by killing or sterilizing people through vaccinations (for example here and here)."

"Contrary to the claim in the post, the newspaper article is readily available online. It repeats a quote from Bill Gates that has repeatedly been used out of context to perpetuate conspiracy theories surrounding the Microsoft founder and his vaccine advocacy.

A Google search returns multiple links to copies of the Sovereign Independent’s fourth edition from 2011 in the first page of results (including here, here and here).

The Sovereign Independent was an Ireland-based newspaper which published conspiracy theories and other misinformation around topics such as vaccines." [aap.com.au]

Too bad it's not true. Our planet is extremely overpopulated and any mention of this and/or finding ways of reducing our bloated numbers are met with howls like this mostly promoted by the continuous growth based industries. Instead we have to go through the old tried and proved methods, war and pandemics.

My thoughts also ...and the winner is; Mother Nature!!! (without us)

Posted by WildgreensLots of Omega 3’s

Posted by WildgreensDid you know?

Posted by UrsiMajorSalty and spicy Vegan jerky tastes like the real thing.

Posted by WildgreensToxins to the Brain

Posted by Wildgreens😡 When vegans are persecuted for speaking out against global warming, and animal cruelty.

Posted by WildgreensKamala Harris & my advice