Sometimes two seemingly contradictory views could still be true, or at least more context is needed. 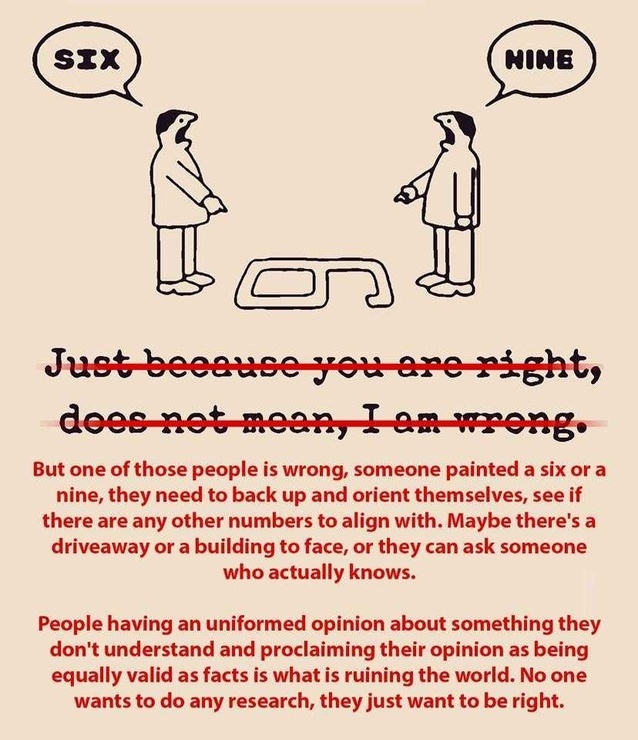 The problem with the argument is that they are not contradicting each other in the picture. These two people (based only on the picture) are both correct.

The problem with the picture is that it is a limited portion of reality whereas the added context that the full picture would provide does in fact make one of them wrong.

The problem with society is that they can't tell the difference or when/how to argue both sides.

YOU are being CONTRARY. They are taking opposing positions on whether it is s 6 or 9. It would only be both if it were art. Otherwise, it is what the writer intended and we need more information to determine the seeming contradiction.

@empirical LOL, they actually aren't being contradictory. Nowhere in there did they say that the other was wrong, or that they were the only correct person. Imagine that someone outside the picture asked "what number do you see?" are they still in opposing positions?

@mattersauce The person getting the answers to the question you just suggested is getting contrafictory information. This conversation is demonstrating the meme. We both could be right depending on context and point of view, yet you jumped to contradict the way I summed up a meme about not jumping to contradict. Hmm ...

@empirical Ok the irony is killing me. Please tell me you're arguing out of irony and you don't really think I was contradicting you when I literally didn't even remember what you wrote and had to go back just now to look at it. Please.

@mattersauce I don't know what to think. There are so many people online, even on here, that will argue in circles revolving around their point of view, disregard any other point of view and completely miss the main points. It's a time suck, especially when they accuse you of being the one who is wrong and you feel compelled to defend your honor. That is one of the very reasons I posted the meme and yet you seem to have instantly started doing what they are doing in this conversation.

I described them as seemingly "contradictory" and you said they WEREN'T being "contradictory". You directly contradicted me, but insist that you weren't contradicting me. That sounds like total nonsense. So many people think this type of reasoning is normal and OK. It is insane. I would be happy to drop this, because this exchange has been rather annoying. Honestly, I am at the verge of starting to block people who drag simple conversations on for days. It's like they have a dysfunctional compulsion to be contrary that they can't control.

One misunderstanding I can see from what you are now saying is that I took another meaning to "argument" than you meant (I thought you were criticizing my "argument" as in my statement, but you now seem to mean that you were criticizing them in their "argument" as in for their bickering). That doesn't matter now, though, because, from what you are saying about not remembering what I originally wrote, you weren't being contrary at first as I accused you of being, but then, in response to my reply where I once again called it a contradiction, you went on to insist they weren't contradicting each other. Therefore, I still see you as contrary and that you are acting like people in the meme. If you see them as bickering, how can you keep saying they are not contradicting each other? (One definition of contradict is "to say that something that somebody else has said is wrong, and that the opposite is true " ). Yes, they are both right from their perspective, but they are accusing the other of being wrong in the meme. That's the whole point. We need more information and context to know who is wrong, whether it even matters and what should be done about it.

@empirical Ok well I am going to take some fault here then as I can definitely be an argumentative person and sometimes the tone of what I write comes off that way even when unintentional. So know that first off, I was not trying to contradict what you originally wrote attached to the meme.

Secondly as to my point regarding the meme, both the crossed out text and the new text are true. The original picture and text is showing two people who are both correct, without contradicting each other. Just because one person sees a 6 and the other sees a 9, does not mean one is right and one is wrong. While it is rare, this scenario can exist in reality. You are assuming that by offering their answer that they are ALSO saying that the other is wrong, that is an assumption which is why I offered up my example. Imagine that there is a third person standing off to the side asking "please tell me what number you see on the ground". This would make both of them correct and at the same time, not contradicting each other. The person receiving the information is getting accurate information from both parties while it also does not match. The assumed question is "which number is on the ground?" while the correct answer would be both 6 and 9 meaning they could be answering together.

On the other side, more often than not there is additional context that can be added as the new text states, other numbers forming a pattern would indicate that it is either a 6 or a 9.

The gap with people is the lack fo ability to tell the different scenarios. There are opinions, there are facts, and then there is perspective.

In my opinion it is our responsibility to judge each scenario objectively and without bias to come to a conclusion. With the data from the original meme it is perfectly accurate, while in reality more often than not the new text is usually accurate.

Don't get me wrong though, I love this meme and that you posted it. I enjoy the discourse and don't mind disagreeing with people which is why I must apologize as now I'm assuming that I came off as offensive.

I will definitely state when I disagree with someone and have many times, however I will try very hard to attack the concept, premise, or post as opposed to the person. I don't want someone to consider that one idea that they provide I consider enough for me to judge them wholly. You can be goddamned Mother Teresa and think La Croix is a great drink which will legit throw me into a tizzy but it doesn't mean you're a bad person, just have TERRIBLE taste in drinks. I do know however that it happens online often which is why I apologize as I have a way of getting under people's skin. My bad.

@mattersauce I appreciate your response. I must say, though, that I do not enjoy this type of discourse. Obviously, I am OK with the subject matter since I was the one who started the conversation, but I lose interest when it starts taking too long and we are still not gelling. This type of conversation is probably better for real life.

One of them might be wrong and it might matter. What if a pilot needed to know whether that was a six or nine to know if he or she could land? Whether something is a 6 or a 9 could matter legally in other contexts as well.

They ARE contradicting each other. Stop saying they are not! They are making opposing claims and their faces are not peaceful. Sure, they are both justified in their assertions, but they are contradicting one another. That's why there is a problem.

Sometimes the cartoon is right that one person can be right without the other necessarily being wrong, but I can relate to the person who crossed it out because people are overusing the concept. Sometimes one of them is wrong and they need to get more information to enhance their perspective instead of fighting over a limited one.

This is making me thirsty. Care for a La Croix? lol

@empirical At this point I think we're saying the same thing. I can absolutely agree on this 100%:
"Sometimes the cartoon is right that one person can be right without the other necessarily being wrong, but I can relate to the person who crossed it out because people are overusing the concept."

Oh god no, yuck! La Croix is like drinking seltzer water from a fire hose while someone in another room whispers the name of the fruit on the can. Now I am judging you

"This sentence is false."

If the sentence is true, it is false.

If the sentence is false, it is true.

Contrariwise...unless someone painted the number to be ambiguous, to provoke you on purpose, and leave forever the question is it 6 or 9? Knowing that it could be either...which makes both correct.

If 6 was 9 -- Jimi Hendrix. Seriously, though, that is why the police will take statements from anyone and everyone who witnessed something. Viewpoint, perspective, attitude of the witness, memory, etc all make the witnesses tell something different. And why we have juries of more than just 1 person.

Six or nine? It's all a matter of orientation, indeed!

Perspective is allowed that way of thinking, for sure. Truth? Maybe, since to me, truth is more about intent of honesty. But right and wrong (facts), that's a different ball game.

You can include a link to this post in your posts and comments by including the text q:154519
Agnostic does not evaluate or guarantee the accuracy of any content. Read full disclaimer.