I used to have an Imaginary friend.. lol 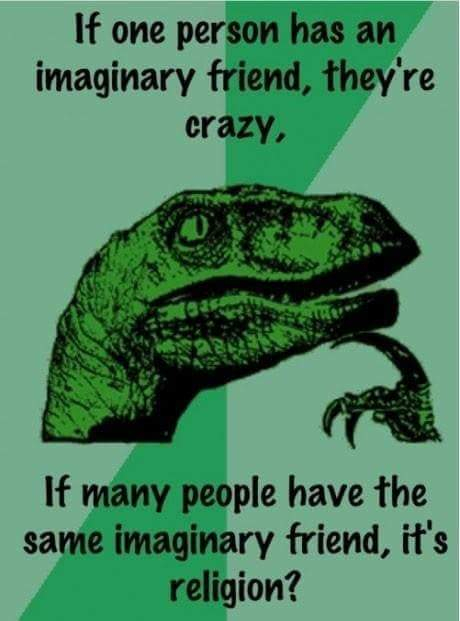 Before "Fight Club"... In the 90's I lived "Horny Club" in Crete, Greece. Hugo Hecman and me did a lot of Damage. But I was the only that got caught and got Divorce!!! Ain't that some shit? On my early teens... 12, 13, etc I created imaginary rock bands and latin bands, draw them on stage, made album covers, even made songs for their albums... some band names I still remember... "Wooden Ensemble", "The Manifold of the Magical Thinking Machine", "The Band of The Break", "Hard Rock Bluesers", "Super Electric Blues Band", "Conjunto de Canas, Cuerdas y Cueros del Area Metropolitana de San Juan". Thank You for bringing me back that memory!

Did you loose them mine still exist in my head all I have to do is utter the power of suggestion and they are there at my beckoning call. The best is when I am finished with the I just unimagine them.

Every time someone asks me why I don't believe in god, I say, "Because I stopped believing in imaginary friends when I was five!"

Oldie but a goody

You candd include a link to this post in your posts and comments by including the text q:165316
Agnostic does not evaluate or guarantee the accuracy of any content. Read full disclaimer.