I grew up in a Christian home, went to Evangelical/Baptist prep school, and went on to attend a Methodist University where the veil was finally lifted from my eyes after read Marilyn Manson's auto biography and later Christopher Hitchens's "God is not great" and several other books by Dawkins, Harris, Etc. For everyone else who used to be religious, what was your turning point? Lengthy comments welcome and encouraged.

I was always agnostic but what really turned me was the funeral of my mum’s partner. He had died of leukaemia and had a Catholic funeral. The priest spouted bullshit about sin and hell and repentance and all I saw was my mum in tears, completely broken. I got home, played Losing My Religion on repeat and cried on the floor. Since then I have been very vocal about my atheism. Why would a loving allow a kind, gentle man, whom my mother adored, to die a and painful death?

I was not deprogrammed by atheist authors, didn't start reading any of them til I'd been an atheist for a couple decades.

I had a teacher in my young teens who taught me the scientific method, at the same time I was studying Logic in programming applications, but this led to studying a bit about the fundamentals of logic.

This teacher taught that the method could be applied to all knowledge, any claim. So I did. my religious beliefs did not pass the test.

I was forced to join a church with my parents at 13. They don't celebrate Christmas or Easter, doesn't eat shellfish or pork, practiced Old Testament holidays, but for some reason believe in Jesus so it doesn't make them Jewish. When we joined, my dad had an opiate addiction and this religion helped him back o his feet so why in the hell do I HAVE to go to this church. Plus he's one of the fundamentalist with a tendency for hate speech (as expected) COMPLETELY forgetting he had a Korean wife he had 2 children with. I went 8 years with this religion until college and lo and behold, it was a Christian institution with "normal" beliefs. My parents told me that THESE Christians are the ones that lost their way and are not true Christians (at this point, I really don't give a damn who's who). It was after my first year at that school where I just thought to myself, "I'm tired of trying to please a god who apparently doesn't know which "right way" to worship him and why would I give my worship to someone who never really helped me?" It was then on I started doing my own thing. Breaking free from religious control little by little. I'm having a rough time I'll admit, but the fun and independence I do have now has been the best I've ever had.

I think if a few things in my life would've been different I could still be a believer. If I found a bit more success in areas I prayed hard about... Or if I possessed whatever it is believers have that makes them sense an answer or "relationship" when they pray... Ultimately, I just got nothing. Silence.

At some point I just couldn't pretend these things were true any more. 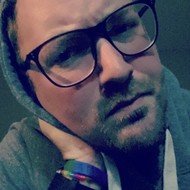 It's hard to say for me. I was very much against conformity in my early teens and often looked at how the masses seem to always follow the same path.

I think I was just watching a large group of people exit a theater one time. The venue had lots of doors, but everyone seemed to all go out the same door that the first person had went through. It just didn't make sense to me that no one deviated, even when the line backed up.

I started to see this trend in lots of different ways and eventually I think I just applied this to the church I had grown tired of going too. If any deviation came up at church I was told to just have faith and believe.

I don't necessarily remember the time I stopped believing, but I do remember the first time I told someone I didn't believe. It was my best friend at church that I didn't think that God was real. He said that was nonsense and that I could tell I had hurt his feelings by saying that. That's when I realized that I had to hide my beliefs as it may hurt people that I cared about. I know that was at least 1992 as we were talking about The Spaghetti Incident.....

I’ve noticed people di put an awful lot of thought into something that doesn’t exist, my thinking is simple, it doesn’t exist so I spend my time on things rooted in the real world… I don’t struggle to be an atheist, there no god, that’s not my fault so I don’t need to justify it... Play a guitar, have a beer and die having been amused by it all.

I have answered this question in detail about a dozen times in as many weeks and I'm not going to bore people by answering it again. I can't think of a new way to answer it.

Maybe the subtext here is that while deconversion is a Big Deal and a game changer to the deconvert at the time it happens, it's really just a small and ultimately mundane thing in what passes for the great scheme of things. Sort of like acknowledging that everyone has to drink water when you previously spent your life denying the obvious by observing a baroque set of rituals and beliefs that tell you otherwise. In an ideal world those rituals and beliefs would never have gotten in our way.

This is why so many atheists who are not deconverts, cannot understand how anyone could have ever given credence to such silliness.

So on one level this is something to have deep discussions about, and on another level, geez, get over it already. So you learned not to urinate in public. Good for you, but please do move on to brushing your teeth or something.

I realized while away from college that I was not being a "good christian" and went through a lot of turmoil. After trying change my life fit this, I started question whether or not there was a God and therefore a point any of this. That's when I started doing research about claims of the bible, fallacies, inconsistentencies, etc. I was exposed atheists on YouTube and the larger community as a whole. I then decided that I was an agnostic since I couldn't prove either position. About a year later, I found out about a prayer study at a Methodist hospital that was seeing if prayer improved the rate of recovery. Not only did prayer do nothing, but the patients that knew they were being prayed for actually had a much worse recovery. This was the point where I concluded that

i may disappoint you here because i was never religious, even during my "religious" year, and i was never christian. i was raised in a secular jewish household, and my turning point had nothing overtly to do with religion. it's just that my folks told me, and i believed, that long-haired boys were dirty and rebellious. when i could see for myself that this wasn't necessarily true, i said, what else do i believe that isn't true? so i sort of went through my beliefs and god just went right out the window.

The Sound Of A Good Book
25 members

You can include a link to this post in your posts and comments by including the text q:184905
Agnostic does not evaluate or guarantee the accuracy of any content. Read full disclaimer.