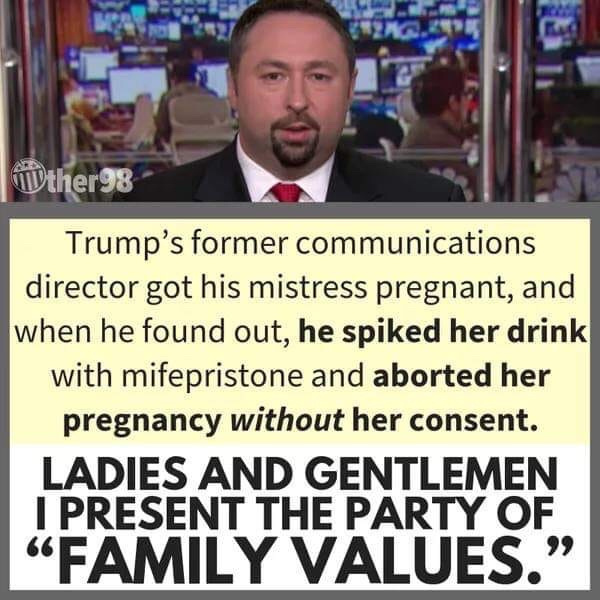 I'm always skeptical of the more outrageous claims even if they're connected to Trump. People should include links so we can look up the facts.
In this case, it appears that the claims are likely to be true and that there is even additional outrage to be had, according to Snopes: [snopes.com]

Jason Miller, who served as a campaign surrogate for President Donald Trump and political analyst on CNN, has been accused of slipping a woman a pill that induced an abortion, according to a 14 September 2018 court filing in a custody case.
...
The court filing, which can be viewed as embedded in a 21 September 2018 story published by Splinter News, was signed by Miller’s ex-girlfriend and fellow Trump campaign staffer A.J. Delgado, who in July 2017 gave birth to a son fathered by Miller. (Delgado had an affair with the married Miller during the 2016 election.) In the filing, Delgado seeks a psychological evaluation of Miller and expresses concern for their son’s safety because Miller has unsupervised visits with the child.

According to the document, Miller began an affair with a Florida stripper in 2012, whom he impregnated. Miller is accused of giving the pregnant woman smoothie drink containing an abortion-inducing drug without her knowledge. As a result the woman, identified only as “Jane Doe” in the filing, reportedly became violently ill to the point of requiring hospitalization and lost the baby.

These people are Nietzsche's supermen.

You can include a link to this post in your posts and comments by including the text q:349495
Agnostic does not evaluate or guarantee the accuracy of any content. Read full disclaimer.