I have a strange question.
Why do "believers" hold their hands together and bow.
Do all religions do it? When did it start?

In Buddhism there's a greeting where you clasp your hands together and say "namaste," which is Sanskrit. It means "I honor you."

The Masons have a funny handshake and roll up a trouser leg! Just though I’d throw that in...I do know it’s not a religion, although they do bar Catholics from joining and it does have overtly religious initiations.

We could have a whole thread on their signs alone and another on their religiosity. I didn’t know about the pant leg, thanks.

That's from Monty Python.....don't try to fool me.

After reading the post and getting to the googled section I have to admit I now have an answer to a question I've never had.

A lot of religions have sign language. The Buddists do a one handed thing and Hinduism has a whole slew of hand signs. We’ve all seen pics of Muslims kowtowing. The holding of hands together is a specific symptom of a specific religion and doesn’t really mean anything in the wider world of humans imo. I don’t think it’s strictly a religious thing though. A lot of human groups have sign language both to identify each other and remind members of their commitment to the group. Think of gang signs or even the peace sign. 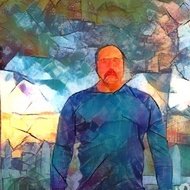 Hey come to think of it we atheists should have a hand signal!

The Buddists chant is holding beads between the palms.

@PondartIncbendog in the Hong Kong Kung fu flicks I watch the monks hold one hand straight up and down in front of their chest. Kinda like a Christian praying but with just the one hand. And the fighters often have this cool thing they do for a show of solidarity, it’s a fist clasped by the other hand held up face high.

When I asked Lord Google, this is what I got:

The joining of hands "leads back to men's early desire to subjugate each other and developed out of the shackling of hands of prisoners!

"Though the handcuffs eventually disappeared, the joining of hands remained as a symbol of man's servitude and submission and his inability (or even lack of inclination) to grasp a weapon."

Another reference (and a selective quote from it):

"Religious historians trace the gesture back to the act of shackling a prisoner’s hands with vine or rope: joined hands came to symbolize submission. In ancient Rome, a captured soldier could avoid immediate death by joining the hands together. Just as waving a white flag today, the message was clear. “I surrender.” Centuries later, subjects demonstrated their loyalty and paid homage to their rulers by joining their hands. In time, clasping the hands together communicated both an acknowledgement of another’s authority and one’s own submission to that authority."

Hey! I coulda googled but I didn’t think of it.

Thanks for doing it for us. It was really pretty interesting.

Thank you. I should have done the work myself.
But its interesting.

Who knows? Who cares? Not me. I'm an atheist.

Because their brain is loose in their skull.

They are getting ready to catch it?

You can include a link to this post in your posts and comments by including the text q:376613
Agnostic does not evaluate or guarantee the accuracy of any content. Read full disclaimer.