Something people could learn from vets 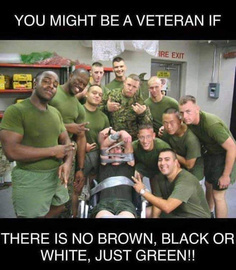 I was having a beer with a vet and her 2 brothers a couple of days ago. She was extremely racist and trying to throw her garbage into the conversation. I/ we ignored her well enough to skip around her shit.
I was pre warned as I was FB friends with her at one time, but unfriended her. Not due to racism, but her Type A personality.

35 + Years ago, an aquaintance, Bako, a biker, vietnam vet (Army) was into Nazis and white supremacy. ( My 1st go around with this. ) VERY VERY Racist. He passed away a few years back. He would probably be pleased at the state of the world. But to be fair, he raised his family, paid his taxes, worked hard for his brothers.

IDK a lot of vets. IDK if vets are less racist or more tolerant. I know that they all aren't. IDK if they want to continue the war they were in, never outgrew racism or something in their past can't be changed within them.

I was a raging bigot before I served. I pretty quickly learned that someone's skin color (not to mention social class) told you nothing about what kind of person they were. Granted not everyone had my experience, nonetheless this social leveling is one of many reasons why we should bring back the draft.

Great teacher about people isn't it

You can include a link to this post in your posts and comments by including the text q:386132
Agnostic does not evaluate or guarantee the accuracy of any content. Read full disclaimer.