The first question we need to ask is what kind of reptile was Mary... 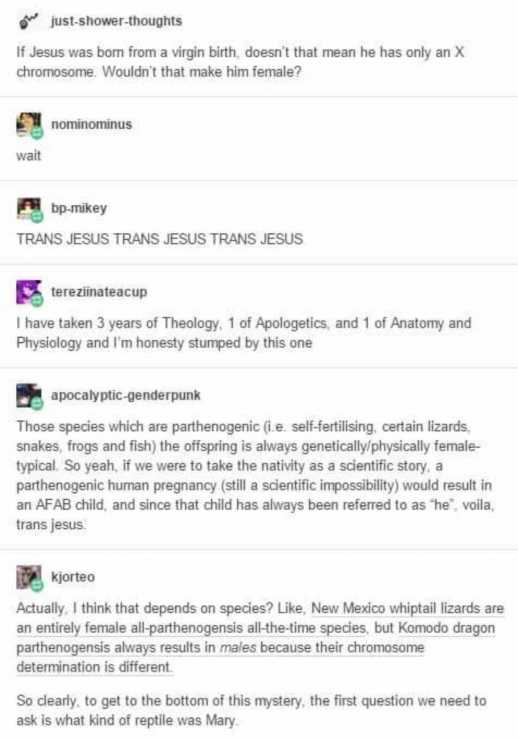 Interesting point, but you are being way too logical about this. Miracles are not logical. If they were, they would not be miracles.

Sorry, but are you saying you believe in miracles? Religiot alert!

Now that last one was an illogical reply. (LOL)

The three "wise men" were actually magicians, probably from Persia. Interestingly enough, "Magi" were followers of Zoroaster. This is even more interesting when the similarities between Zoroastrianism and Christianity are compared. Likewise, the comparison of Mithra(s) and Jesus.

And just like that I gained a new favorite curse word

@Blindbird glad I could help out!

It’s called parthenogenesis, so Mary was a skink!!!

The answer to this is simple and straight forward. If god was responsible for this, then it has the power to overcome any logical objections. Remember this is divine intervention.

Sorry, are you being serious?

@GoldenDoll I am serious about what a god would be capable of if one existed, and am not serious about the divine intervention as there is no god(s) to intervene.

She was a human with a strong sense of self preservation and a creative mind. I would insist I was carrying the messiah, too, if it would keep me from getting stoned to death. Worth a shot, anyway.

No Virgin Birth Here
One of the most ridiculous Christmas stories is found at Luke Chapter 2.
1And it came to pass in those days, that there went out a decree from
Caesar Augustus that all the world should be taxed.
3And all went to be taxed, every one into his own city.

So you can see that according to Luke, everyone in the world, or at least
everyone in the Roman Empire, was to obey the decree of Caesar Augustus,
and return to the city of his birth in order to be taxed.

Think about how crazy this would be. Millions of people would be traveling
many miles, perhaps some traveling hundreds or even a thousand miles,
to get "home" during the month of December, the month with the fewest
hours of daylight and cold weather. Then after registering for the tax, they
would have to go back to where they now resided during the month of
January the coldest month of the year.

The people would have had to walk, or ride horses or donkeys or ride
in wagons. Taking a ship to go home would have been dangerous
as it says at Acts 27:9 , because December is after the "fast" or Day
of Atonement, which is usually in October."""9Now when much time
was spent, and when sailing was now dangerous, because the fast
was now already past, Paul admonished them,""" Acts 27:9

We live in a modern world with planes, trains, and automobiles,
hotels and motels, fast food restaurants and electricity. We could
do it. But imagine the primitive conditions 2000 years ago and
you can see how ridiculous this idea is.

Does this all seem like a ridiculous way to fabricate a Virgin Birth?

We can't even get people out of Texas or Louisiana when catastrophic storms come. Think of how much poorer those ancient folks were.

@Blindbird Absolutely correct. This story just demonstrates how the Bible is fiction.

it just makes Mary a liar who didn't want to get thrown off of a carpark for adultery.

neither am i. I would do the same for sure. komodo dragons can have young without mating.

There were car parks? I thought everyone rode dinosaurs.

She was a crocodile and it was a hot summer so Jeebus developed as a male.

You can include a link to this post in your posts and comments by including the text q:40282
Agnostic does not evaluate or guarantee the accuracy of any content. Read full disclaimer.