Have you given a thought that despite these close similarities, Cory Booker is not as much paid attention to as Pete Buttigieg is?

How much difference you think Cory Booker's race is making or not making? 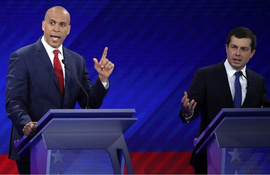 Booker isnt quite as charismatic and as good of an orator as Buttigieg, but overall they are very similar. I think the biggest difference is Buttigieg having less of a "record" than Booker, so irs somehow easier to believe he won't be yet another corporate dem... its a stupid thing to beleive, but i guess hope springs eternal for some people

Knee-jerk reaction is that Pete's sexuality is a plus ATM while Bookers race is as much of a detriment as ever. Progress was made and then look at the backlash we got (for want of a better term) after the first black man was president - the most rascist pres since Nixon and arguably the most mentally unfit person to ever hold the title of president on the entire continent. The racists fucking mobilized.

Whoda thunk electing the most qualified person to the job would only be in our short term, not long term, best interest?

So when picking between the 2 the gay guy gets the edge because he isn't a minority and it's now cool to support gay rights.

I agree with you.

I think there's something to who the media decide to cover. I don't know if it comes from the DNC or what but I haven't understood it. He hasn't followed through with his more moderate stances, trying to appeal to both sides. Should have stuck with what knows.

booker is a more experienced public servant, has been a mayor like pete but is now a senator. he made a fabulous speech at one of the democratic conventions and i have had my eye on him ever since, lo these many years. he is not an obama wannabe. he is himself, and he is qualified.

another difference between them is that booker is more progressive than mayor pete. you may be surprised that i say that. he has an unjust reputation as being owned by big pharma, mostly due to two elements: 1. new jersey is home to a lot of big pharma, which donates regularly to BOTH PARTIES, for tax purposes. this doesn't mean they get pay-to-play privileges. it means that's who is in new jersey. 2. a while back booker voted against an amendment (to a very bad bill) that would have permitted us to import inexpensive pharmaceuticals from canada. people went ballistic over that because the media reported it -- without mentioning that there was another amendment to that same bill (which, incidentally, didn't pass) and that amendment ALSO provided for importation of cheap canadian pharma, and booker voted FOR that one. he had to choose between them and he chose the one he thought was better. all the media reported was the he voted against cheap pharma. that's not true; he voted FOR cheap pharma. he just did it in a different amendment. so... he got this unfounded reputation.

booker is in the senate NOW, doing what a minority senator can. if we take the senate back, and he isn't president, he'll be a majority senator. he knows how the federal government works -- and how it should work.

there may be a racial component to the disparity in their coverage. that would only be one element and it could be counterbalanced by a sexual orientation element. i don't know if it evens out. i do know that mayor pete is new and thus interesting, and booker's been around a while now and thus perhaps not as newsworthy in and of himself. i am not talking about their ages, of course.

i like mayor pete but he is not as progressive as i would like him to be. i like booker better. in the primary, i am voting for warren. in the general i am voting blue no matter who.

Booker struck me as an Obama wannabee, too late.

Buttieg appears to be being taken as genuine, I’d agree.

You can include a link to this post in your posts and comments by including the text q:438921
Agnostic does not evaluate or guarantee the accuracy of any content. Read full disclaimer.