Socialism IS a scareword, most often confused with Communism thanks to over 60 years of American propaganda.

But many people will always believe propaganda over reality. Sad because, many of those believers are impoverished thanks to those who have programmed them. 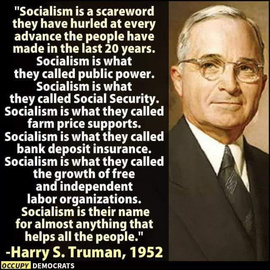 And the refusal of Americans to educate themselves on the facts.

Socialism is what they called:

In short, socialism is what they called the consent of the governed.

They want the governed to pay taxes and to provide cannon fodder for their wars.

They want power and they do everything they can to divide the governed.

And republican politicians are doing it again today to delude and defraud voters.

Socialism is what the ruling class calls anything that involves the lower classes doing something beside shutting up, paying their taxes, obediently going to work instead of striking, and supporting all wars started for the benefit of the ruling class.

Truer words are never spoken, but the propaganda works, partly because most working class people still buy the myth that if they behave and work hard, they will be rich, or at least better off someday due to their efforts and the fairness of the system. They are wrong, but their dreams and hopes die harder and slower than they should. By now I think most poor people have figured out that the system is rigged, that capitalism will never help them, but since both major parties have forgotten them, they see no point in voting and they are right to drop out of the process.

For sure. Hope springs eternal; it's easier to buy lottery tickets than to fight for change. LOL

You can include a link to this post in your posts and comments by including the text q:572587
Agnostic does not evaluate or guarantee the accuracy of any content. Read full disclaimer.