Especially when the business they claim to be "protecting" didn't ask. 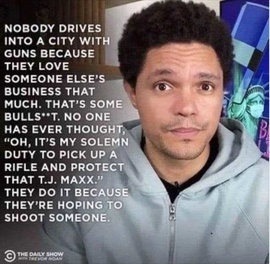 He wasn't protecting TJ MAXX. This "entertainer" is so part of the establishment he can't even use a private mom and pop business as an example, he has to use a national corporation. Of course, OF COURSE! I don't think to many people would be protecting TJ MAXX. Trevor Noah is a good agent for the paid overlords though. He should get a bonus for that one! Give him a couple MORE MILLIONS! He'll get richer while the poor people suffer and fight amongst themselves and their communities and sense of safety are destroyed. Nice trick these people play on the average hard working Americans.

"Trevor Noah's net worth is estimated at $100 million

Maybe he was just joking? 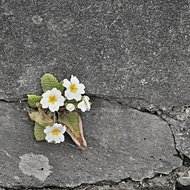 A whole lot of BS which has nothing to do with a spoiled white racist traveling from one state to another to kill people.

@redbai Where is the evidence for the "white racist"? I want to hear it. You said it now back it up with facts. If you can't back it up with some facts then we know you are making false accusations. But I am sure you have facts and wouldn't just say that without having them. So what are they?

@Flowerwall "Where is the evidence for the "white racist"?"

In the video where he's posing with Proud Boys giving the white power sign.
[nbcnews.com]

@redbai I don't know anything about Proud Boys or white supremacists, but that hand signal has a meaning outside of what you are saying it means - it means "Ok". It's also used sarcastically to say " Okay, sure", when someone says something hard to believe. That symbol is also part of a game kids play - I know less about that. Other than hearing this repeated OVER and OVER in the media, where is the proof about this hand signals? I want to know. You can say the "Peace Symbol" actually means "Nazism" and if you say it enough, say it on the news ppl will believe it and then everyone who makes the peace sign is now labeled a "nazi". I don't believe that there are white supremacists everywhere, because where are they? You would hear more on the news about the crime. I don't hear it. What crimes are associated with these ppl? I want to see statistics.

@Flowerwall ... and the sign also means white power. Your ignorance is not a metric of anything but your ignorance.

@redbai Okay, I won't say it is never used in this instance, now I know. But bcuz it is used SOMETIMES in this instance, doesn't mean always, and again I ask you, I WANT to know the truth, please give me statistics to substantiate this claim of "white supremacists" in increasing numbers. We should be able to attach statements such as this to numbers that validate the claim. I don't think there are numbers bcuz you know the media would talking about it.

@Flowerwall Since I didn't say anything about "white supremacists in increasing numbers", I have no responsibility to find evidence to support it. If you want to find out go do your own research.

@redbai No evidence? I suspected that. Riots are harmful to people. Things just devolve quickly in that scenario. People should not be killed or injured over political disagreements, and the riot itself isn't good for anyone involved either directly or just as members of the community.

@Flowerwall ... and there's that inevitable dishonesty that I can expect from you whenever engaged. I didn't say there was no evidence. You suspect a lot of ignorant shit all the time.

You know what else is harmful to people, corrupt cops who shoot you in the back for walking away. But you don't see the cause of the protest as relevant, just that a protest occurred. There was no riot, there were protesters and an active shooter who went there to kill people.

@redbai You gave no evidence. Give evidence. I looked into this and didn't seem to find any, what evidence did you come across?. It doesn't take long to spell it out. Don't feel you need to give exact citations. Just point in the direction. What numbers or what is it, books, discussions? Just let it out, your facts.

As to protests and riots, there are links to negative health outcomes following it. Those worse effected would be in the lower economic brackets. People like Noah and other rich celebrities are so removed from reality they can respond whatever way but are likely insulted from feeling the effects at all. I would much prefer to hear working ppl, real people talk about their experiences and feelings. And most might not even be aware of the psychological impact it had on them, but it likely affected ppl a lot. I don't know the details of initial case too well that triggered protests. But now not only is that man injured, others are dead, an elderly man was beaten, who else? And psychological damage noone has any way of gauging. And it's real.

@Flowerwall Go find your own evidence, I'm not bothering to try and give evidence to someone who has shown countless times an obtuseness that is pathetically dishonest or incredibly ignorant.

@redbai This issue is more important than any personal failing you think you perceive, so your bother would be worth it.

Also, I don't think I clearly spelled this out earlier regarding the hand signal, "meaning of the well-known hand sign has arisen in part as the result of a deliberate hoax concocted on the internet ...what it’s about most of the time is a deliberate attempt to “trigger liberals” into overreacting". This is what I read about it.

@Flowerwall I find it narcissistic and condescending that you believe you have the ability to determine the value of my time.

Exactly. Kyle wanted to do this and his mommy drove him halfway there. He was not asked by anyone to come there for any reason. That was the first myth created . A current myth even now is that people think he went to help others because he had a medical kit. Apparently some critical thinkers have even fallen for this last one.

You can include a link to this post in your posts and comments by including the text q:633777
Agnostic does not evaluate or guarantee the accuracy of any content. Read full disclaimer.