A little Spinoza for your Memorial Day

from Will Durant’s
“The Story of Philosophy”
published in 1926

“The essential principal of [Tractatus Theologico-Politicus] is that the language of the Bible is deliberately metaphorical or allegorical; not only because it partakes of the Oriental tendency to high literary color and ornament, and exaggerated descriptive expressions; but because, too, the prophets and the apostles, to convey their doctrine by arousing the imagination, were compelled to adapt themselves to the capacities and predispositions of the popular mind.

“All Scripture was written primarily for an entire people, and secondarily for the whole human race; consequently its contents must necessarily be adapted, as far as possible, to the understanding of the masses.”

“Scripture does not explain things by their secondary causes, but only narrate them in the order and style which has most power to move men, and especially uneducated men, to devotion...Its object is not to convince the reason, but to attract and lay hold of the imagination.”

Hence the abundant miracles and the repeated appearances of God.

Men love to believe that God breaks the natural order of events for them; so the Jews gave a miraculous interpretation of the lengthening of the day in order to impress others (and perhaps themselves) with the conviction that the Jews were the favorites of God; and similar incidents abound in the early history of every people.

Sober and literal statements do not move the soul; if Moses had said that it was merely the East wind (as we gather from a later passage) that cleared a path for them through the Red Sea, it would have made little impression on the minds of the masses he was leading. Again, the apostles resorted to miracle stories for the same reason that they resorted to parables; it was a necessary adaptation to the public mind.

The greater influence of such men as compared with philosophers and scientists is largely attributable to the vivid and metaphorical forms of speech which the founders of religion, by the nature of their mission and their own emotional intensity, are driven to adopt.

Interpreted on this principle, the Bible, says Spinoza, contains nothing contrary to reason. But interpreted literally, it is full of errors, contradictions, and obvious impossibilities—as that the Pentateuch was written by Moses. The more philosophical interpretation reveals, through the mist of allegory and poetry, the profound thought of great thinkers and leaders, and makes intelligible the persistence of the Bible and its immeasurable influence upon men. Both interpretations have a proper place and function; the people will always demand a religion phrased in imagery and haloed with the supernatural; if one such form of faith is destroyed they will create another. But the philosopher knows that God and nature are one being, acting by necessity and according to invariable law; it is this majestic Law which he will reverence and obey. He knows that in the Scriptures…

“God is described as a law-giver or prince, and styles just, merciful, etc., merely in concession to the understanding of the people and their imperfect knowledge; that in reality God acts...by the necessity of his nature, and his decree...are eternal truths.”

“I have often wondered that persons who make boast of professing the Christian religion—namely, love, joy, peace, temperance, and charity to all men—should quarrel with such rancorous animosity, and display daily toward one another such bitter hatred, that this, rather than the virtues which they profess, is the readiest criterion of their faith.” 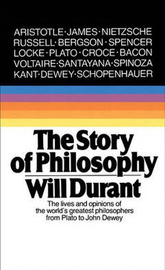 The works of Will and Ariel Durant occupy an entire shelf in my library. They were without peer as author historians during the previous century. Thank you for bringing this excerpt to our attention!

I appreciate the feedback. Thanks.

Baruch Spinoza was a Portuguese Sephardic Jew living in Holland having the strength of character to accept excommunication from his Jewish community at a very young age. Holland is credited with being very accepting to Jews; but the excommunication not only ostracized him from the Jews, but stigmatized him with the Christians. His commitment to follow his convictions, set the stage for Rousseau, and my favorite Voltaire! His philosophy is imperfect to me but I love his mind and his contributions!

Fortunately, things, including education, have moved no rather a lot since Spinoza's day. (Perhaps not in the U.S. but US exceptionalism is a special failing, not a universal. ) Spinoza may not have been a snob and a narcissist by the standards of his own day, but was certainly a victim of the attitudes of his day, and could not have envisioned the advances possible in education, and human aspiration, that would one day render the term "the masses" unacceptable.

And sadly scripture still fails, even if taken as metaphor. Since metaphor, even where you can discern its probable original meaning, still leaves a trite, banal, limited and sometimes quite evilly intended text. Which is open to lend its fake authority to almost any interpretation. Spinoza is guilty of falling for the Golden Age fallacy, if he thinks that he discerns especial wisdom in it, and not that he sees, merely a picture image of his own understandings which he is projecting on to it. Which is most likely, since it is almost impossible with a metaphorical view of a text, to ever discern the original meaning anyway, and it is always the case of getting from it what you bring to it, which is invariably at least banal therefore, but almost always also the favourite go to, for the lover of the confirmation bias fallacy.

He certainly rightly discerns that the basic text of the bible, is vulgar, crude and full of errors, and destined to have its main appeal to the most basic and shallow of human understanding, but fails to see that the better wisdom he thinks that he sees in it, is his own thoughts that he brings to it. Nor is he in line of course with the most modern of historical and textural thinking, which fails to find any single consistent unified genre or style in the text. Rather discerning that not only was Pentateuch not written by Moses, but that it was probably not even written even by a single group of authors working together for a single purpose, but was brought together by a number of editors, all with different agendas from numerous existing scraps over long period. And that therefore, the mere idea that the bible is a single genre, whether true history, imaginative fiction, propaganda, poetic metaphor, or folklore, is simply childish, in the light of todays learning. Though to be fair to Spinoza, he was probably intending his statements to be only in the most general and overall of terms, yet it is not possible not to look deeper without giving up on progression and learning.

ambiguous - having a double meaning.

There is a genius to things of biblical text. There is a lot that has at least a double meaning.

When more that one meaning or usage can be applied depending on the circumstances of its use, it can serve to have an efficacy when something has more than one applicable use.

So, like a double edged sword it could cut either way.

For the word of God[old testiment] is alive and active. Sharper
than any DOUBLE-EDGED sword, it penetrates even to dividing soul and spirit, joints and marrow; it judges the thoughts and attitudes of the heart.
Hebrews 4:12

Nominally Christian men (and women) do certainly "quarrel with...rancorous animosity, and display daily toward one another...bitter hatred..." Hence their obsession with guns. I'm pretty sure Jesus would not approve.

You can include a link to this post in your posts and comments by including the text q:668996
Agnostic does not evaluate or guarantee the accuracy of any content. Read full disclaimer.