Who wrote thIs book called bIble? 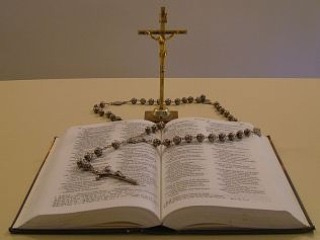 No one is really certain(other than Paul, the great salesman), there are some known generalities from various fields of study. Looking into Bart Ehrman would be a start, then some his sources maybe.....

The Bible OT or Torah was written by Jewish religious scribes,no one knows who exactly.It was written in stages with each piece of separate scriptures added from 500 BC to 200 BC.

NT was written again as separate sciptures from around 50 AD to early 1st Century.Again no one knows for sure who wrote these either.The main 4 gospels have been accorded the names of Matthew,Mark, Luke and John but that was not till around mid 1st century,they were supposed to be written by disciples but they were not.The only author we do know about is Paul,who although he never met Jesus claimed to be an "Apostle" and given his mission via visions he had talking with Christ.He has some of his letters put into the N T. The rest of it is written by various early Christian scribes writing in the name of a favoured disciple.Again no one knows who.

All these separate scriptures were eventually put together into the Bible as a complete book in the 4th Century by the Roman emperor Constantine who had converted to Christianity,he wanted an official book of the religion as there were many different collections of scriptures about before this.Any scripture deemed heretical were bannned and burned.

In 1609 King James locked a bunch of guys in a room with some Greek, Hebrew and Latin "scrolls " and wouldn't let them out until they all agreed on the translation. I'm making a joke about it, but that really how the King James version was written.

Chewbacca and his Ewok disciples.

The first books were taken from Sumerian cultures via Babylon which predated the Old Testament by a couple of thousand years. An example would be the story of Gilgamesh which was transmuted into Noah. A good bit of the Old Testament is "true" as long as you understand that the Hebrews exaggerated everything to make their culture and god look the best.

Allegedly Moses wrote the first chunk of it. Even the bits after he died. I wish Gore Vidal had his literary agent, I would love to hear him on Trump.

It is an odd piece of trivia that the old testament was written after the new. It was collated around 100 AD

A very diverse bunch of lunatics with at least one shared delusion.

The bible isn't a book, it's a collection of books apparently written by 40 different authors over a span of thousands of years. Church elders decided in the middle ages which books were included, and which ones weren't.

It's a book filled with books. The book of books-lol!!!!

Of course this is also why their is such a rich variety of opinions of what god is in it. One can flip through and tailor design any God one wishes.

A bunch of serial killing psychopaths with serious Daddy issues.

I asked the pasture the other day where the writings from the demigod were in the bible? The answer I got is that the supreme deity erased them to prevent false worship.

Richard Elliott Friedman: Who Wrote The Bible. He actually wrote a whole book on his topic. I need to order my copy soon.

Your guess is as good as mine lol.

Someone that pulled off the biggest prank in the history of Mankind!

You candd include a link to this post in your posts and comments by including the text q:13858
Agnostic does not evaluate or guarantee the accuracy of any content. Read full disclaimer.