You May Be Wrong 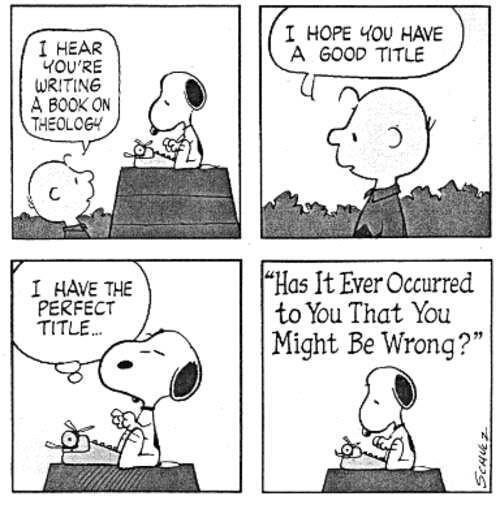 Love Peanuts. But we're not wrong if we're true to what we feel and think. That's true for religious people too. We're always right if we're following our own path, being true to our own path. We're wrong when we impose our truths on others. We're wrong when we judge. And judging is different than sharing. I want to live in a world where we can all share who we are, where we are, without judgement. Freaking idealistic, I know.

I’m a math teacher and you can be wrong. The solution to 2x-1=-3 is -1. Period. However, that’s math. The rest of the world is in the grey. What I really liked about Schultz’s cartoon is it’s lack of affiliation. It’s a simple and honest appeal to reason. Think about your position. You could be wrong.

@Gatovicolo I think we're in agreement? 'We;re not wrong if we're tru to what we feel and think. That's true for religious people too...' isn't that the equivalent of your '...lack of affiliation' ? Yours was more eloquent, I'll give you that.

Nice to know that Charles Schulz wasn't as religious as his comics seemed to indicate.

Good grief I always expect to be wrong unless of course I am right.

I agree. You can't just believe just because you may be wrong. And for a god to send us to hell because we can help our disbelief would be monstrous. You can flip the switch like, "oh god died for me and he wants to save me from hell, I believe in you now and I invite you into my heart" it doesn't just happen out of fear.

It's just the old, repackaged, and fatally-flawed 'Pascal's Wager' that presumes belief is volitional. There is no switch in one's mind that can be turned to the 'I believe' position. One can act as if they belief, claim to believe, go through all the motions, but true belief in anything has a basis in something and can't be faked by anyone. And if there is a supernatural entity who will judge me and punish me for my having drawn the conclusions I have from the experiences and knowledge I have gained over my lifetime, that entity is monstrous. Doesn't eternity worshipping anything sound more like punishment? Eternity is a long, long time.

Belief isn’t volitional? If that were the case, there’d be very few atheists.

Perhaps Schultz just meant “What if you’re wrong?” There’s no need to think of this as repackaged anything; just appeal to reason.

Why would you doubt that belief is not volitional? It is was volitional, a believer could throw the switch for, say, 48 hours and stop believing in their heart of hearts that which they previously believed, then throw the switch back to the previous position. Belief isn't an at-will kind of thing at all. I could no more decide to believe in the Easter Bunny than anything else. I have no rational basis for such a belief and am unable to "choose" to believe anything for which I have no rational basis. This includes any religious point of view. Appeal to reason?

Christains have often used the "scare tactic" of "What if you are wrong"...implying I could go to hell for being an atheist.

If only the Pubs felt this way.

You can include a link to this post in your posts and comments by including the text q:34594
Agnostic does not evaluate or guarantee the accuracy of any content. Read full disclaimer.