“Just last week, the president of the United States stood before the American people and refused to condemn white supremacists and hate groups,” Whitmer, a Democrat, said at a press conference Thursday afternoon.

Six men involved with a militia group called Wolverine Watchmen are facing federal charges of conspiracy to commit kidnapping, and an additional seven people are facing state charges in connection with the alleged scheme. The men wanted to “storm” the state Capitol in Lansing with 200 men to take hostages including the governor, court documents say.

Whitmer said Thursday that the suspects aimed to “possibly kill” her.

Trump failed to speak out against hate groups during his first presidential debate with Democratic contender Joe Biden last Tuesday. Pressed to condemn the Proud Boys, a group of violent right-wing extremists, Trump replied: “Proud boys, stand back and stand by.” Members of the Proud Boys quickly turned the president’s words into a T-shirt and other merchandise.

Heavily armed anti-lockdown protesters began showing up at the Michigan State Capitol in April around the time President Donald Trump tweeted “LIBERATE MICHIGAN.”
Trump also deflected criticism at the debate by claiming ― against the analysis of his own top law enforcement officials ― that the problem comes mainly “from the left wing, not the right wing.” The FBI warned as recently as two weeks ago that right-wing militia groups pose a “violent extremist threat,” particularly as the election approaches.

“Hate groups heard the president’s words not as a rebuke, but as a rallying cry — as a call to action,” Whitmer said. 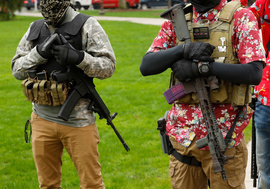 Of course it's Trump.
I think he'll have to go on a killing spree and start eating his own waste on TV before some of his followers stop supporting him, even then there would be hold outs.
It's like all his ex cabinet members that have turned against him, the fact they were with him in the first place makes it hard to see them as allies now. They have to go a LONG way to convince me that they're over their Trump mental illness. 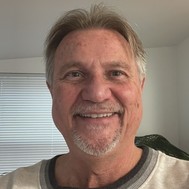 Exactly. Vote Republicans out of office!

Some friends are saying 45 has condemned hate groups, but he has not done it consistently and passed on the best Opportunity to do so.

Let’s not kid ourselves he isn’t sincere even when he does.

And he only does it after a major outcry. These are his supporters. Plain and simple.

It's easy to see where Trump stands. It's clear in his 'gut level' reactions when questioned. Saying there's "blame on both sides" in the aftermath of Charlottesville and exhorting the Proud Boys to "stand back and stand by" are merely two examples.

He know's not the power of his words to those that need that excuse to move ahead in there action ,Happy Michigan nipped it in the bud,,basically hate speechs ,How does he get away with it

Because his supporters follow him like dumb cattle being led to slaughter. (Some but not all) he has conditioned them to think he’s god-like........that he could do no wrong and he’s the answer to all their problems.

Kind of harkens back to the late 20s to early 30s when certain others pitched similar lines.

He has gotten away with so much he has no fear of being called out. Narcissists routinely use others to do their bidding, this is just another example of this as the governor is a Democrat.

You can include a link to this post in your posts and comments by including the text q:541844
Agnostic does not evaluate or guarantee the accuracy of any content. Read full disclaimer.