"A quasar is a supermassive black hole in the core of a galaxy, wrapped in a bright disk of material. The most distant quasar now known is J0313-1806 (illustrated), which dates back to when the universe was a mere 670 million years old."

In J0313-1806's formation, did the gargantuan seed black hole form through the direct collapse of vast amounts of primordial hydrogen gas, or did J0313-1806’s seed start out small, forming through stellar collapse, or some other process? 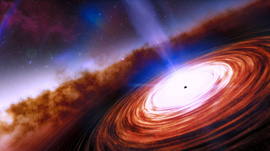 Edwin Hubble hypothesized two universes, the first of them expanding.

*If the red shifts are a Doppler shift . . . the observations as they stand lead to the anomaly of a closed universe, curiously small and dense, and, it may be added, suspiciously young.

On the other hand, if red shifts are not Doppler effects, these anomalies disappear and the region observed appears as a small, homogeneous, but insignificant portion of a universe extended indefinitely in both space and time.*

What if anything do you conclude?

#3. Hubble's theories are much older than the current theories, which have the benefit of more information about the universe than Hubble had.

Hubble did astronomy. The more recent theories are those of mathematicians, aka theoretical physicists.

They write gravity-only equations and, within our solar system where gravity is strong, their equations almost correctly describe what they see. I worked in the Apollo program and knew of the mid-course corrections necessary to land on the moon.

In the vastly larger Milky Way galaxy, where electricity is vastly stronger than gravity, their equations do not correctly describe what they see.

Stating such a question seems meaningless. For the vast majority of readers, they wouldn't have a clue, given even the most able minds in cosmology don't know. So why ask such a question and offer only two possible answers?

If people are interested in astrophysics, they may know more about this.
I added a third option, in case you wish to comment on what it is that you know which answers the question. Best wishes.

In these times - it is nice to look up
with wonder at the universe.
Thanks !

And we know so little about the universe.

I have no idea!

The best answer is we don't know how it formed.

Neither. Black holes are science fiction, aka lies.

What evidence do you have that blackholes are fiction?

Timothy, the people who say black holes exist have the burden of proof. Like theists, they have given you only words.

@Petter, black holes matter only to those who are being sucked into one.

@yvilletom
Saying they don't exist has a burden of proof.

@xenoview I’m not going to teach you science. Period.

And the Earth's FLAT..

@Charlene From my battle station on an anti-aircaft gun of a US Navy destroyer, the earth didn’t look flat. From my watch station on the bridge of that destroyer the earth looked less flat.
What persuades you to say it is?
( Deal? You delete yours and I’ll delete mine. )

@yvilletom
You have failed to provide evidence for your claims.

@yvilletom No, not true. They have collected the required data, and through mathematical discovery plus a pinch of physics, chemistry and a growing volume of technology, black holes are actually a reality.

Their gravity-only model needed more gravitation, they hypothesized a source of gravitation which they called a black hole, and interpreted radiotelescope data as that black hole.

@Thinking You do the same, please.

@yvilletom You first; you led the conversation and stated your position in opposition to the commonly help opinion.

@Thinking You named data, math discovery, physics, chemistry, and technology. The lie doesn’t require all of that.

You read some science fiction and accepted it as true. Cite the article and the publication in which you read it.

Most likely the massive galactic black holes never experienced a period of actual stellar activity. They formed with the first generation hydrogen giant stars that only lasted tens of thousands of years at most before nova/super nova.
Such stars are long extinct now, not even represented on the Hertzsprung-Russel diagram of main sequence stellar evolution.

Astrophysics is pretty mind-boggling and amazing. I remember hearing something like in your comment. Thanks very much for sharing that.

@AnonySchmoose The closest we would have now would be unnova where a red giant is just the right size and instead of exploding just wink out by collapsing too fast to explode.
Betelgeuse could very well be of the unnova type.

@Willow_Wisp
I guess you've studied this and remember.
I've watched many videos and remember too, though not as well as you.

I agree, there has to have been a point where surrounding matter is too dense for expansion into a red giant or where any nuclear force could prevent collapse. Any stellar activity would have been short lived, this does have some interesting implications for dark energy expansion.

If you're fond of the Big Bounce that could be choice c.

You can include a link to this post in your posts and comments by including the text q:571737
Agnostic does not evaluate or guarantee the accuracy of any content. Read full disclaimer.