We rely on members to let us know when posts contain content that violiate the community guidelines. The most common reason that content gets flagged is that it contains dehumanizing or trolling/baiting text. Getting too many flagged posts will result in account termination.
2 2

From an earlier article about Art Van:

"Suburban Detroit-based Art Van Furniture, the number one furniture and mattress retailer in the Midwest, announced on Thursday that it is shutting down its company-owned stores and beginning liquidation sales today. The company, which is expected to file for Chapter 11 bankruptcy reorganization early next week, employs 3,100 people at locations in Michigan, Illinois, Indiana, Ohio, Missouri, Maryland and Virginia ...

"A majority ownership of the mid-priced furniture retailer—founded in 1959 by Archie Van Elslander in the city of East Detroit (now Eastpointe)—was sold to the private equity firm Thomas H. Lee Partners in January 2017 after the death of the founder at age 87. Although the exact price was never disclosed, it has been reported that the Boston-based private equity company financed the deal worth over $550 million.

"As explained by the Detroit Free Press, 'Private-equity firms use debt to acquire companies, and the debt is then owed by the company. The debt loads can leave companies with little room to maneuver if business conditions deteriorate. And any problems that arise can be exacerbated by the fees that private-equity firms ordinarily charge companies in their portfolios.'

"Such concerns were not expressed by the Free Press in January 2017 when then-Art Van CEO Kim Yost and the sons of the founder Gary and David Van Elslander announced the deal with great fanfare. Fears of asset stripping by the private equity vultures were waved away amid grandiose plans announced by the owners for new stores in major markets like Chicago, Indianapolis, Columbus, Cincinnati, Cleveland and Pittsburgh ...

"The rapid expansion added more debt to the Art Van balance sheet and, when sales faltered under the impact of growing online furniture and mattress retail, the company could not maintain its repayment obligations. Private equity fees also played a role in the precarious financial position of the company. When suppliers began to refuse making deliveries for fear that they would not get paid, the handwriting was on the wall for the imminent bankruptcy."
[wsws.org] 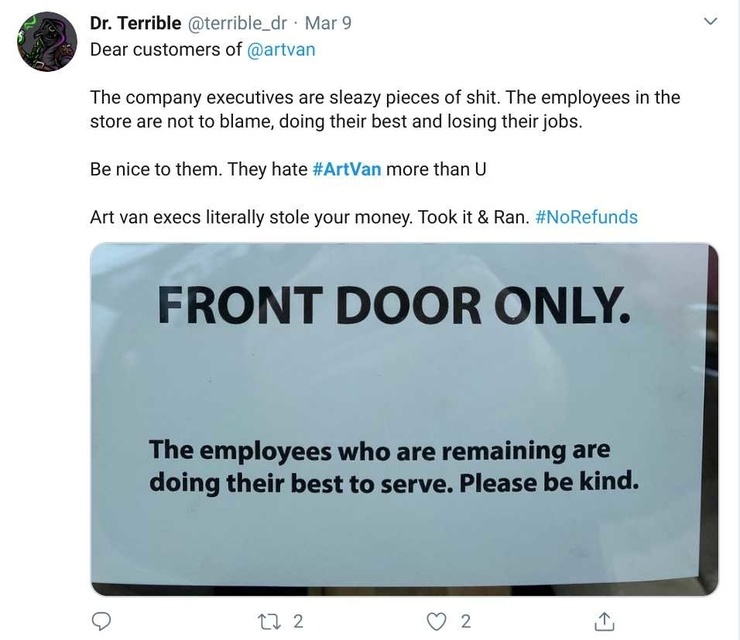 Same thing happened in my area with a grocery chain, Dahl's Food Stores...

Vulture Capitalism at it's finest..

Yep, reminds me of Mitt Romney and Bain Capitol. Vultures to the max!!!!