After declaring Roger Stone a victim of the “Russia hoax” perpetuated by the Left and its allies in the media, President Trump has commuted the three-year prison criminal sentence for the Republican operative and dirty trickster, who was due to report to federal prison on Tuesday after being found guilty of obstruction, witness tampering and lying to Congress.

Good grief, is it my imagination, or has Trump actually just pardoned the real-life version of the Monopoly guy? I mean, Stone is a villain right out of Charles Dickens. Why, this is an act so corrupt, it’s almost enough to make Kim Jong-un and Vladimir Putin blush.

Now, I’m no legal expert, but it appears what the Trump Administration is basically arguing is that - someone shouldn’t be punished for committing a crime which “they really should’ve gotten away with.” And while that may sound a bit odd to the rest of us, that kind of thinking makes perfect sense inside the Trump world.

Anyway, on a more positive note, we had over 70,000 new cases of the coronavirus yesterday, so expect the Trump folks to report that the Covid-19 numbers are really looking good.  Which is correct, assuming you’re looking at things from the point of view of the virus. 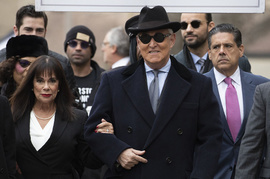 All he needs is a long cigarette holder and he’d look like the cartoon criminal Penguin. He already acts like him.

tRump isn't "draining the swamp," he is releasing the scum from it into the rest of the forrest.