In response to the arrests of 13 right-wing domestic terrorist militia members, who were recently arrested while preparing for a coup by kidnapping and possibly killing her and her children, Michigan Gov. Gretchen Whitmer blamed the President and his spokespeople for stoking the fires of hate - by sending out dog whistles to violent groups such as Proud Boys with messages like “Stand Back and Stand by.”

Well, just how does Gov. Whitmer think folks with heads full of Fox News are supposed to act anyway, when all they wanna do is head down to the liquor store or a tattoo parlor - and she forces ‘em to put on a silly mask?

Talk about destroying the mood! Hell, you walk into a tattoo parlor, hoping to get some macho tattoo like “We Hate Baby Harp Seals” - and then some “girl governor” tells you that you have to put on a sissy mask? And then people wonder why they wanna kidnap her and her children? Dahhh!

Meanwhile, in related news, the President and Attorney General Bill Barr say they plan to send “monitors" out to prevent “voter fraud." Hmmmmm, I’m thinking maybe they should think about recruiting a few of those militia guys as their very special “monitors.”

I mean, if those dudes don’t “discourage cheating” at polling places, I don’t know who will. After all, it's pretty simple to spot a fraudulent voter. Why, they're the one’s who aren’t wearing MAGA hats or carrying any AR-15s. 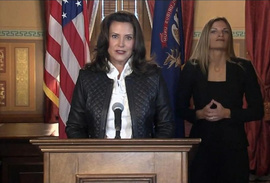 We dip deeper into third-worldness.