Sarah Huckabee Sanders to Run for Governor of Arkansas

The New York Times reports that former Trump White House press secretary Sarah Huckabee Sanders, plans to announce she will be running for governor of Arkansas - making her the first person from Trump’s orbit to announce their candidacy. A bid that will put the former president’s political strength to the test, in a divided Republican Party.

Now admittedly, my first reaction to her announcement was pure, abject horror - but then I thought “wait a minute!” When a person who’s nationally known for telling nothing but lies, tells you she's running for governor, doesn’t that actually mean - she’s not really running for governor? Why, this whole idea is completely crazy. I mean, isn’t The 700 Club hiring?

Of course, the truth be known, if she does decide to run, she’ll have no problem getting all the votes she wants, given that most everyone living in Arkansas are basically cousins anyway, and relatives will naturally wanna vote for own their kin folk! About the only thing that could trip her up in a place like Arkansas, would be if she got primaried, by a full-on QAnon nutcase.

Not to mention, red state conservatives are some of the most absolute, sleaziest hypocrites on earth, so they’ll naturally want to vote for someone like Sarah, who represents their “core values.” Ironically, if she does win, after having lied for Donald Trump for years, she’ll now need to appoint her own “Director of Lies & Misinformation” to be her spokesperson.

That said, all this political talk makes me also wonder what’s next in store for Donald Trump’s racist-in-chief, Stephen Miller? Now normally, there’d be lots of job openings for a guy like him in Central and South American police states, but that might get a bit awkward. Talk about karma, imagine a rat bigot like Miller - suddenly finding himself working for Latinos. It doesn’t get better than that. 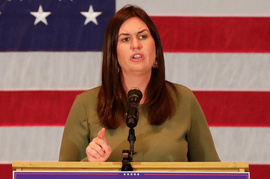 Maybe Daddy, down in his Florida mansion, will bring his bass and his pedophile friend Ted back home and do a concert for her.

What a sad reflection on the country that this lying bitch thinks she has a shot!

What a sad reflection that she does

My sympathies to the citizens of Arkansas.

Scraping the bottom of the barrel