During a recent appearance on Full Court Press with host Greta Van Susteren, Sen. Rand Paul (R-KY) defended his refusal to wear a face mask on the Senate floor, by calling other senators "science deniers,” then declaring that “he wants to be a leader” because there is no evidence whatsoever that wearing a mask protects one from getting the coronavirus.

OK, Senator Paul, we get that you want to be a leader - but, the big question is, a leader of what? Hell, when I was a kid, I wanted to be a pirate, but the only pirate ships I could afford, came out of cereal boxes, and they were so small, that the only body of water they could safely float around in, was my bathtub. But, that’s not really important now.

Anyway, Sen. Paul justifies his anti-mask position by claiming that ”almost everybody who got infected, said they were wearing a mask all the time.” Excellent point senator! And, I’d also bet that nearly everyone who contracted the virus, was also “breathing all the time.” So, instead of wearing masks, why don’t we just consider holding our breath - until this whole coronavirus thing finally blows away?

Now, what I found rather funny, was how often during the interview, that Greta Van Susteren kept referring to the fact that Rand Paul is a doctor. The truth is, he went to school to become an ophthalmologist, but when it came time for certification, he didn’t care for the established certification process.

So, being Rand Paul, he created his own Board of Ophthalmology and proceeded to not only certify himself, but also sell certifications to others. Not a bad trick, if you can get away with it - and, because it was Kentucky - he did.

So, we now discover that not only is Rand Paul a US Senator, but he’s also a self-certified ophthalmologist. Now, that may fly in Kentucky, but I suspect anywhere else - not so much.

If you ask me, the only area in which Rand Paul has any real expertise, is in getting the crap beaten out of him by his neighbors. And, I suspect, if he continues putting out all this bogus COVID information, some people might start inquiring if anyone happens to have his next-door neighbor's phone number. 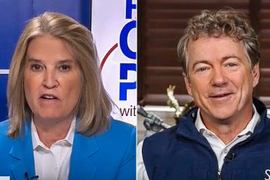 Self certified ophthalmogist. Who knew that was a thing in the US. WTF

Not sure what he even stands for. Haven’t seen anything positive come from him. He just does his best to shit on everything...

He is a world class idiot, so he lives in Kentucky to grift off the rubes there.

Hope his neighbor fucks him up reaaal good this time for his vote for Fascists..