We rely on members to let us know when posts contain content that violiate the community guidelines. The most common reason that content gets flagged is that it contains dehumanizing or trolling/baiting text. Getting too many flagged posts will result in account termination.
Visit Group Join Group
6 5

Three people were killed and two others seriously wounded, in a mass shooting at the Jefferson Gun Outlet on Saturday, just outside of New Orleans. The incident reportedly began after a gun store clerk simply asked a customer to not walk around with an unholstered loaded gun, until he was in the store’s designated firing range area. This upset the customer, so he opened fire.

Well, aside from all that, it sounds like a simply wonderful place to shop! Now, I wasn’t there, but my guess is that the argument was probably over which one of them gets to be called - “the good guy with the gun.” Oops, guess that honor will now have to be awarded posthumously. Just another “unavoidable necessary sacrifice” our society must make, so our country can continue to live “free.”

That’s right, just another proud patriot, who believes that his right to do absolutely anything he frigg’n well pleases - far outweighs everyone else’s rights. Why, how dare that socialist clerk expect him to follow the rules? We should be grateful we have all these perpetually angry, insecure superhero wannabes, who are ready to take up arms to protect our freedoms against “deep state” gun store clerks.

Now, on a positive note, I’m sure the families of all the victims, are really proud their kin gave their lives like this - in defense of the NRA’s interpretation of the 2nd Amendment, which any credible legal expert will tell you, is a document written by our Founding Fathers, to give uneducated rednecks the basic tools - to one day be able to “own the libs.”

So, we now are left with a country with so many good guys with guns, leaving so many other people dead. It’s NRA way! Of course, the truth be known, if these folks weren’t busy shooting each other, they’d most likely be taking each other out - by breathing COVID on one another anyway. After all, let us not forget what a horrible threat those face masks pose to our “freedom.” 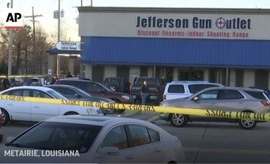 Redneck right wingers with guns, what could possibly go wrong?

The "good guy" with the gun hasnt worked all that often- remember the Walmart shooting, where at least some of the people there admitted that they had guns and hid.

How awful, I bet they felt guilt afterwards. Wonder how many handed their guns in though?

Exactly the kind of idiot who caused the requirement for all rifle range guns in Aus to be attached to a metal block so that they cannot be turned on fellow shooters.
Not only do these guys murder people: there are other far reaching repercussions for years after for innocent unconnected people who would never behave like that and are quite happy to abide by the laws. (Oh I forgot it’s America, life continues as normal then! ) Shocking, the poor gun clerk and his family