Trump communications strategist and political advisor Jason Miller, told Fox News’ Media Buzz this week that the former president will be back in two to three months with a brand new social media platform that he claims will “completely redefine the game.”

Gee, that sounds like a terrific idea - and one that’ll really catch on fast. In fact, I’m sure the FBI and other intelligence agencies will want to be some of the first to sign up. Of course, one can only hope that this new project doesn’t end up getting in the way of Mr. Trump’s golfing. We all know that the former president isn’t really a huge fan of long workdays.

But, just think of it - a new social network - just for liars, racists, insurrectionists, anti-vaxxers, conspiracy theorists, homophobes, grifters, and half-wits. A place where a guy like Donald Trump will be free to talk about “how much he truly despises everyone - who isn’t him.” Yes, my friends, I’m talking about the new social media website - “WhiteFaceBook.”

Of course, the question does have to be asked, can someone actually run a social media platform from their prison cell? Who knows, but I have heard that Rikers Island has a pretty decent server. Not to mention, word has it that son-in-law Jared is busy coding the website as we speak, so you know this puppy is gonna run like a well-oiled machine. And, best of all - Mexico will pay for the firewall. He’s back!!! 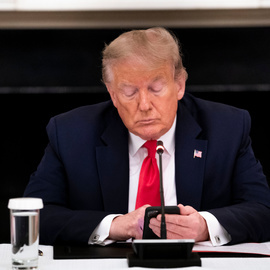 A couple things here. First ole Don doesn't despise everyone but himself. He still has the hots for Ivanka. And second if Don sees the inside of a jail it will be one of those country club prisons for wealthy white collar criminals - but I doubt he will ever go to jail. Even if he is convicted for something that he has done he will just get fined. Or he could always go to Dubai or Saudi Arabia and live happily ever after at the local KFC.

" Mexico will pay for the firewall!" You're hilarious!